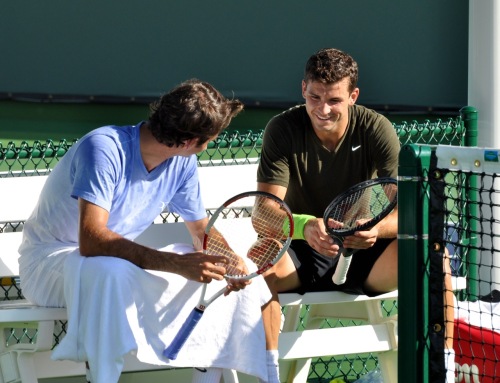 After a morning practice session with Tommy Haas, Roger Federer hit the practice courts a second time Thursday, with rising star Grigor Dimitrov. The young Bulgarian is coming off his second career title in Acapulco, reaching world #16 in the rankings. Seeded fifteenth at the 2014 BNP Paribas Open, the 22 year old has drawn more than a few comparisons in playing style with the Swiss maestro. Federer himself, at 32, is fresh off winning his 6th title at the Dubai Duty Free Tennis Championships. Both players, sponsored by Nike and Wilson, are also clients of the newly formed agency, Team8.

Topic of discussion as shown below, must have been fascinating (photos by Monique Phipps for OnTheGoTennis). The insight from the 17-time grand slam champion; the curiosity of a potential future grand slam winner.

They have only met once in a tour match, with Federer defeating Dimitrov in Basel last year. The Swiss maestro will play his opening match (second round) on Saturday against either Robby Ginepri or Paul-Henri Mathieu. Dimitrov faces either Robin Haase or John-Patrick Smith in his second round match on Sunday. Drawn into opposite halves, they cannot meet until the final. 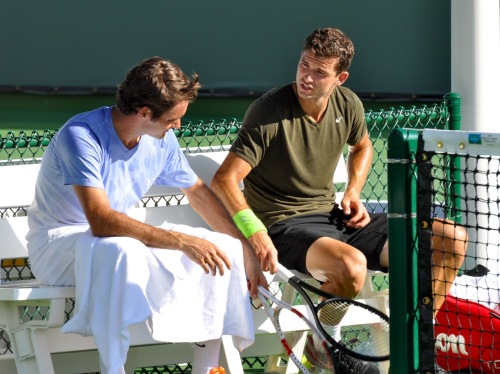 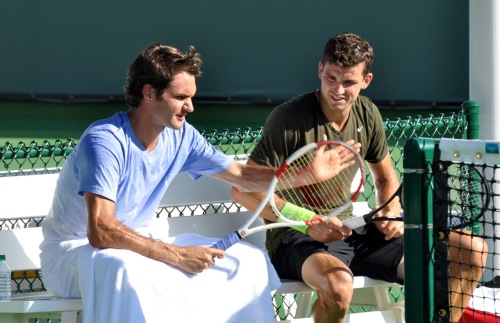