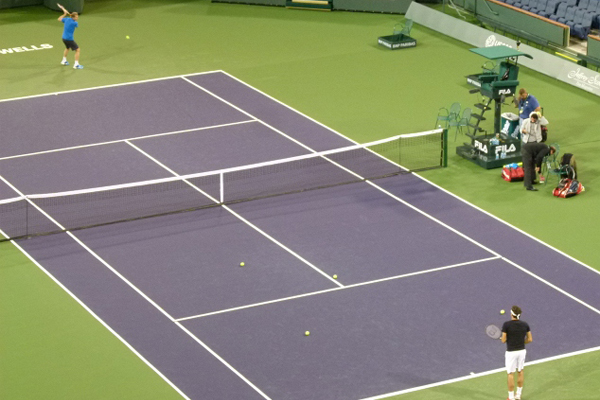 Hours after the draw ceremony was complete, Roger Federer made his way to the tournament site of the 2014 BNP Paribas Open, checking out the new Stadium 2, before heading to Stadium 1 for his first practice session, with coach and advisor Stefan Edberg.

The Swiss maestro went through a series of what appeared to be back exercises (see below), including one where he was down on his hands and knees and did some pelvic thrusting that was – how else can to put it? (video below) – suggestive! Federer and Edberg (coined as #FedBerg), hit for little more than an hour, and the Swede was more than a respectable hitting partner, keeping himself in good shape over the years. 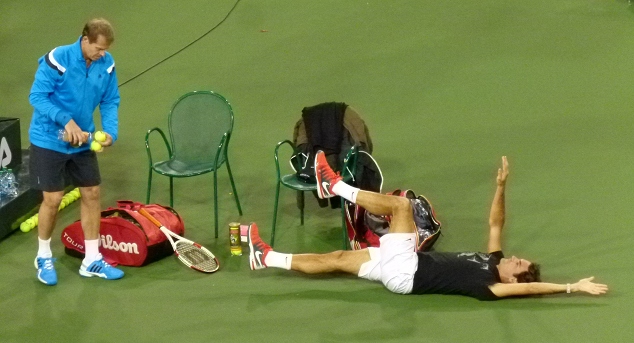 Toward the end, the 4-time champion in Indian Wells exaggerated some grunts on kick serves, fooling around as they ended their practice session. Federer then finished off with three or four deft underhand serves that landed just over the net. “I dare you to do that once, just once,” Godsick said to Federer, appearing to suggest he wanted him to try it in a real match.

After they finished and were leaving the court, Federer sat down in the first row and Godsick took pictures of him looking into his cell phone – maybe he was tweeting. That resulted in a big laugh from everyone, including Edberg.