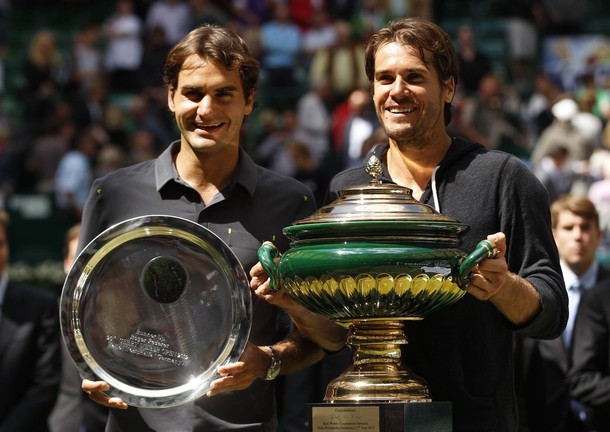 Tommy Haas spoiled the party Sunday in Halle at the Gerry Weber Open, stunning everyone in defeating Roger Federer 7-6 (5) 6-4. Haas’ upset added to his impressive streak, winning his 8 straight ATP World Tour finals. For the Swiss, it was his 7th final in Halle and a chance to win his 75th career title. A disappointing result after breaking in the first game and leading 4-3 in the second set, but as he did all week, Haas was locked in the zone and it would be enough to prevent Federer from winning his 5th title of 2012.

After the match, the Swiss maestro praised his good friend on his performance. “I’m very impressed with how he played today,” Federer said. “Tommy deserved to win.”

“I should never have lost the first set, so that hurt. He got momentum after that,…I’m just really happy for him … happy that he’s been able to fight off so many injuries and come back and still believe in himself, still want to travel, still want to sacrifice his family (life) too,” Federer said of Haas.

Haas was outside the top 200 in the ATP World Tour rankings at the start of the season, but is now projected to reach #51 come Monday. For the German, it is a highly commendable achievement at 34 years of age and after undergoing hip surgery, which kept him out for 14 months between late February 2010 and May 2011.

For Federer, he moves on in his schedule (RF Activity) toward Wimbledon (begins June 25). Stay tuned for more next week as the prestigious grand slam approaches.