Is this Roger Federer’s new racquet for 2012?

There are still many details yet to be uncovered, but, is this Roger Federer’s racquet for next year? Looks like it’s 90 square inches as well, but with some redesign. All sorts of speculation have been spurring around as to Roger’s racquet and his feelings on switching to a frame with a larger head size (93, 95) or a similar frame with lighter weight. This photo shows markings of BLX, 90 and Pro Staff.

It very well could be Roger’s new racquet (paintjob or with actual altered technology underneath), or could be a marketed frame for Pete Sampras (who currently switched to using a Babolat). Also take note, is Pro Staff back?

See for yourself below. Click the image to see a large scale version.

The racquet appears to be the same or strikingly similar to one in a photo which I posted on FedererFan07 on Twitter a few weeks ago, prior to the Montreal masters. 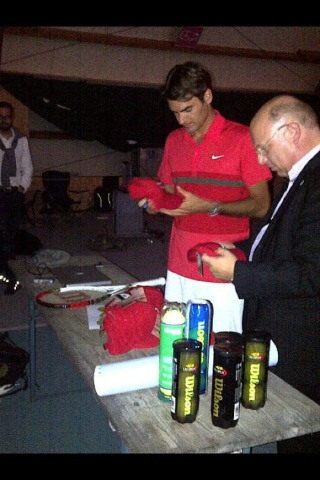 Until a formal announcement is made, the above content and photos are only speculation.