Is Roger Federer really thinking about getting a new racquet?

Sounding unbelievable, Roger Federer is possibly thinking of switching to a new racquet. It may be lighter, with a larger head size, different string and tension set-up, or some combination of those few things just said. However this is only a few words spoken by the greatest player of all time and the rest is up to speculation.

Many comparisons can be made to Pete Sampras who used the same racquet his entire career, and toward the end of his career chose not to change frames. Roger has used the same frame with slightly different versions of technology, yet all with just about exactly the same specifications (90 square inches, 16 x 19 string pattern, about 12-12.5 ounces in weight, 9-12 points headlight in balance). 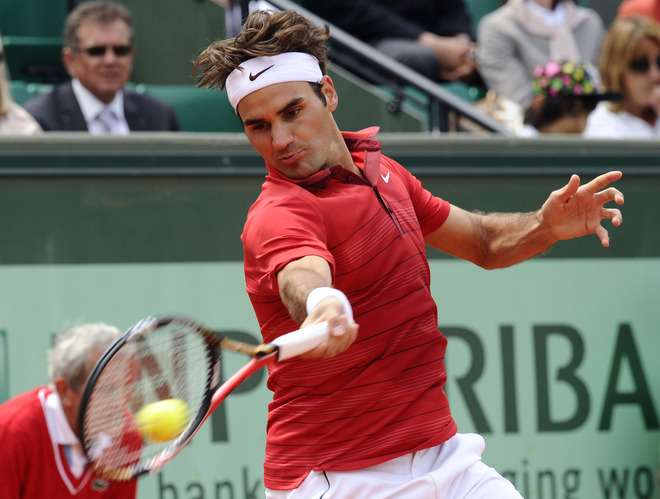 “I’ve last changed in 2002,” the French Open third seed told Zurich’s Tages Anzeiger. “I’d like to test some bigger racquet head models. The problem is that I lack the time for extensive testing.”

One-half of Federer’s team of coaches, American Paul Annacone, told the New York Times that making a change is a 50-50 proposition for the man some call the best to ever play the game. The 29-year-old currently plays with a Wilson with a 90-square-inch head, while most players, such as Rafael Nadal, use 100 square-inch models.

“Most people use it for a heavier ball, but there’s not a lot of guys still who hit the ball heavier than Roger,” said Annacone. “He still hits the ball very heavy through the court.

“People say, ‘Well, what about the mis-hits?’ Well, the racquet-head speed that he generates, whether he’s hitting a 90-inch or 93-inch or 95-inch frame, if he mis-hits it, he’s going to mis-hit it.

“These guys (top players) are creatures of habit, Roger isn’t so much. He knows what makes him successful, but he’s open to debate, to conversations about things that maybe he didn’t used to do. He’s very expansive in his thinking, so it won’t go undiscussed, for sure.”

—-> Great comments by coach Paul Annacone. The game today has evolved into (my opinion but many will agree) a style that is closer to one-dimensional tennis. The majority of the tour today play as Annacone described, with habit, meaning there is less emphasis in using the mind, tactically, with skill and technique. It’s all about developing habits out of hitting forehands and backhands with loopy topspin and playing out the point until usually one player hits the error. 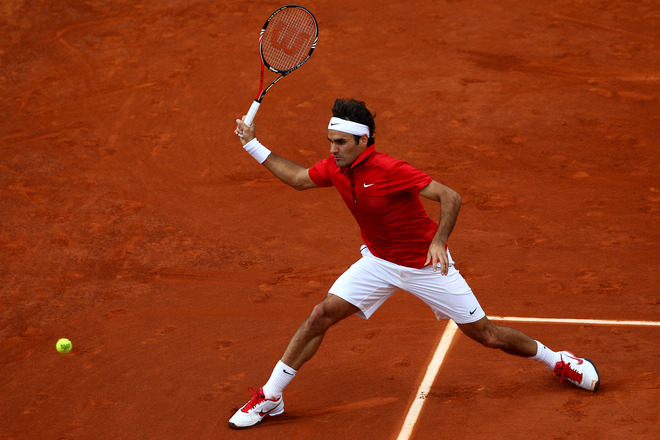 Credit to tennisnow for this excerpt below.

No one can ever argue the inherent ability that Federer possesses. In his prime, and even now, he comes up with shots that many could never even dream about. To be fair, he has had a solid year, thus far, posting a 28-7 record with a title in Doha, but he just really has not been able to pull through those break out matches. He is 0-5 this year against the combination of Nadal and Djokovic. His other losses coming to Jurgen Melzer, and Richard Gasquet, both very dangerous and capable players, on clay, his weakest surface. Looking at a few of his other matches, the aura of invincibility that surrounded Federer has dissipated. So if he wants to truly contend for number one and get past these kinds of matches, what are the steps he needs to take?

That’s where we start looking at his game in general. It’s no secret that the two handed backhand is here to stay, it simply offers a number of advantages for certain shots and in general is more consistent than the one handed option. The added stability and control from the offhand also seems to offer better results on return. Despite originally learning a two hander, Federer made the switch to a one hander, just as Sampras did, and they both worked fine. When Federer first burst onto the scene, however, he was a much more offensive minded player, attacking the net much more often than now. Far too often he seems content to stay at the baseline and trade groundstrokes until he can attack with his forehand. This begs the question of tactics. Is Federer staying back by choice, or has the racquet and string technology come so far that he feels he has no opportunity or chance to move into the court?

No matter what the answer to that question is, and no matter what style of play Federer employs, it is obvious that there is one major weakness that has begun creeping into his game more and more. It has always been the weaker side, but now that his forehand has lost some of its explosiveness, it seems more difficult to mask the backhand. Whether we like it or not (and trust me I don’t) the way the game has moved is towards larger racquets, strung with polyester strings, perfect for players to stand on top of the baseline and wail away at groundstrokes as hard as possible until the point ends. Federer did make the shift in strings, moving to a hybrid that uses a polyester string in the crosses, but he still uses an extremely low powered, small headed frame with almost zero forgiveness. As a former midsize user myself, there is no sweeter feel than hitting a shot just perfect with that kind of racquet, but is it worth losing just to experience that feel? This stance can be debated amongst amateur and recreational players, but when your goals are dependent on your on court results, one has to consider doing what they can to maximize performance. In fact, here is a rundown of headsizes for the top 20 players on the ATP Tour: 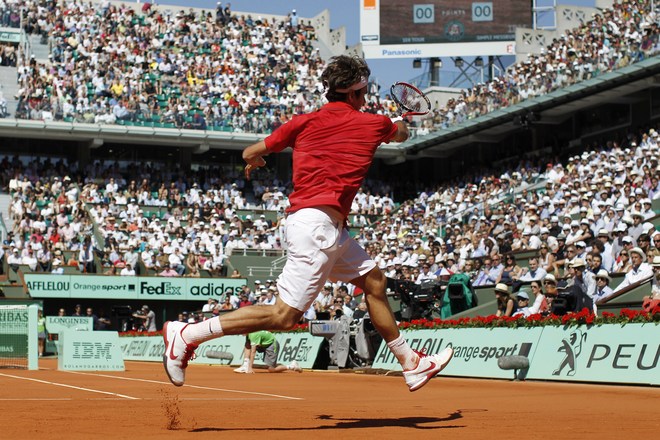 Wrapping up, this news of Federer thinking of a new racquet may end here with just his thinking and lack of time to test out different frames. It could also lead to Roger playing with a new racquet after his little break after Wimbledon or in the beginning of the 2012 season. Regardless, this is a major point in the history of the sport.

Roger Federer is essentially the last player left playing the traditional and conventional style of tennis, relying on skill, technique, balance, and movement, particularly forward movement (rather than utilizing and taking aid from technology of larger, modern racquets which allow the player to play with unorthodox style).

Play at Roland Garros resumes for Day 8 tomorrow, highlighted by an all-Swiss showdown between Roger Federer and Stan Wawrinka.

Watch all of the matches right here on FedererFan07 by going to Live Streaming.