About a year from today attention will be focused on the 2012 Olympics in London. For tennis fans, that means a special occasion as the tennis will be played on grass at Wimbledon. A report out today makes for some interesting possibilities as Roger Federer (or someone thru his team) asked Martina Hingis to pair up for mixed doubles at next year’s Olympics. Ten years ago the duo played mixed doubles and won the Hopman Cup for Switzerland.

Hingis has set many youngest-ever records in tennis and dominated as a teenager before being forced to retire due to ankle and ligament related injuries. She won five singles grand slams, nine doubles grand slams, and one mixed grand slam in her playing career (in addition to holding the #1 ranking for 209 weeks). 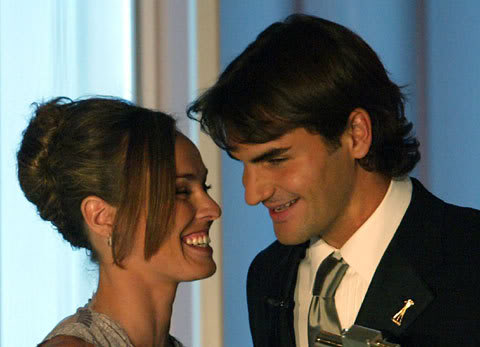 There is a year to go and much to be seen from Martina as she herself has stated the level of commitment and playing at the highest level will be something she needs time to consider.

TDF: You’re playing so well now, and there aren’t really any other Swiss women near the top of the game at the moment…

Martina Hingis: (nervous laughter [she seems to anticipate just as well off the court as she does on it])

TDF: I was wondering–they’re having mixed doubles at the Olympics next year, and someone who has had success in doubles in the Olympics is your countryman, Roger Federer…

TDF: Would you play in the Olympics with him, if he asked?

Martina Hingis: You’re tricky, right? (Laughs) Well…he kind of was like, through the angles, he already, like, you know tried, a little bit? But I don’t know…

TDF: He already tried to ask you?

Martina Hingis: Well…I don’t know? Not him, personally, but…I mean, they asked that question…We’re still a long way away, so…

TDF: But you’re not saying no, you’re open to it?

Martina Hingis: I don’t know, I don’t know…I’m not sure, because you have to really commit. And I feel great right now, but, you know, it’s still a long way to go, it’s another year.

TDF: So just to be clear, someone from his team did ask you?

Martina Hingis: Yeah, they did. But who knows…I mean, I would have to play some doubles before, or some mixed….who knows?

Will Roger Federer and Martina Hingis team up for Switzerland at the 2012 Olympics? We will find out within year (hopefully sooner)!