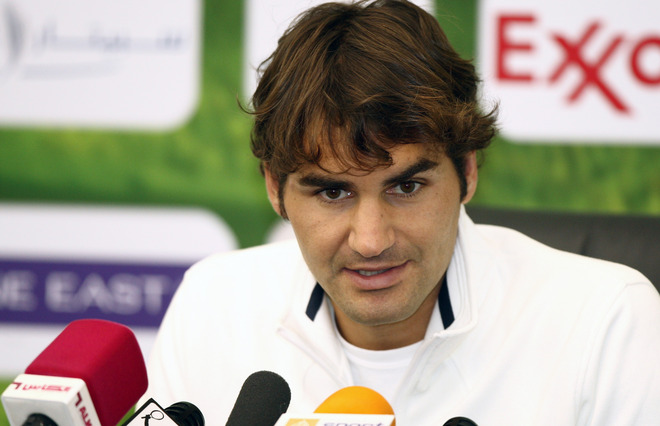 Federer pulls out with back injury

Federer has pulled out of the Qatar Open prior to his semifinal with Jo-Wilfried Tsonga because of a back injury. The 16 time grand slam champion and defending champion in Doha made the difficult decision in a news conference held 30 minutes before his match was scheduled. It is only the second time in his career that Federer has withdrawn from a match prior to its start. The only other occurrence was at the 2008 Paris masters (Bercy), where he was to play James Blake. A stiff back was the cited reason then. Federer has never retired during a match in his career.

The Swiss maestro apologized to tournament organizers but said he did not want to further risk injury ahead of the Australian Open, which begins Monday, January 16.

“I don’t feel a whole lot of improvement for today, and I just don’t think it’s the right time to risk anything more right now,” Federer said. “I still have pain, and that’s why it was the only right decision, a difficult one for me … So it’s a sad moment for me and for the tournament and for the fans, but health goes first.”

“I feel that without play and with the right treatment, I will get through it in the next few days,” he said. “That’s my personal opinion right now.”

Federer also said he has tried several treatments such as massages and baths after he first felt the injury during his second round match vs Grega Zemlja. He would go on to win that match and struggle to victory over Andreas Seppi in the quarterfinals.

“It came throughout two points against Zemlja in the beginning, 2-1 in the first set, and then I wasn’t able to serve properly anymore,” Federer said. “Had the same thing yesterday. I was really playing, you know, with the hand brake on, and I was just trying to manage the situation, really. So it wasn’t very easy to deal with.”

“I’ve just been trying to manage the situation really,” he said. “Back spasms happen and sometimes you can contain them with massage and pain killers. But I don’t want to drive myself crazy with more painkillers, and I need to do what’s right to get it better.”

Speaking about the Australian Open, the Swiss maestro remains positive and will fly out of Doha on Saturday as scheduled. He will then hope to recover with rest and further treatment (10 days until start of Australian Open).

“For Australia, I’m optimistic, just because it’s not very good but it isn’t crazy bad,” Federer said. “I have had bad backs in the past. This is definitely not very good; otherwise I would be playing. But I feel without play and the right treatment, I will get through it in the next few days.”

Stay tuned for in-depth coverage of Federer’s recovery and preparations ahead of the Australian Open.