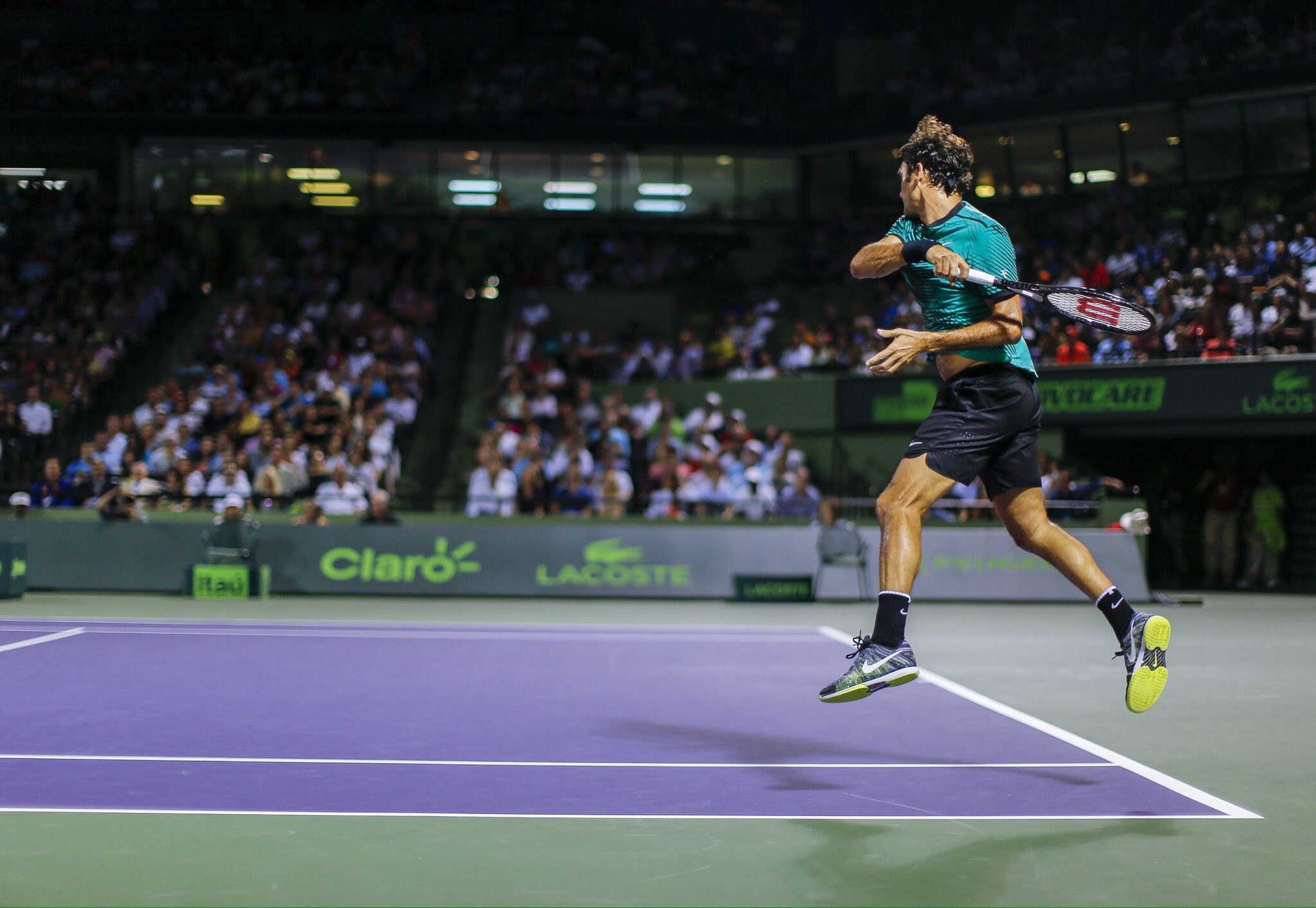 Roger Federer defeated Nick Kyrgios Friday night at the Miami Open in an epic, all-tiebreak sets thriller. The sold out crowd at Crandon Park in Key Biscayne was often loud, at times jeering, and booing Kyrgios after he threw his racket, which happened a number of times – but they were treated to one of the best matches of 2017, with a 21-year-old Kyrgios that could be emotionally described as ‘all over the place,’ yet full of talent and potential. Federer had just come off saving two match points to defeat Tomas Berdych in Friday’s quarterfinals. Both players did not let up for a point, with high octane tennis ensuing from start to finish of their 3 hour 10 minute semifinal match.

Kyrgios struck first, breaking for 5-3 in the first set, but as he served for the set at 5-4, Federer found his opportunity and broke back. There would be no breaks for the remainder of the match. The first set tiebreak stretched beyond 6-all, with the 35-year-old Swiss prevailing eleven points to nine.

Play stayed on serve throughout the second and third sets, with Kyrgios showing his talent in running down a drop shot to hit a tweener for a winner, and strong, aggressive groundstrokes from both players, working all angles of the court. Despite being up 3-1 and 5-3 in the second set tiebreak, at one point having two match points, Federer was unable to reach the finish line and Kyrgios saved both to emphatically send the match to a deciding third set. 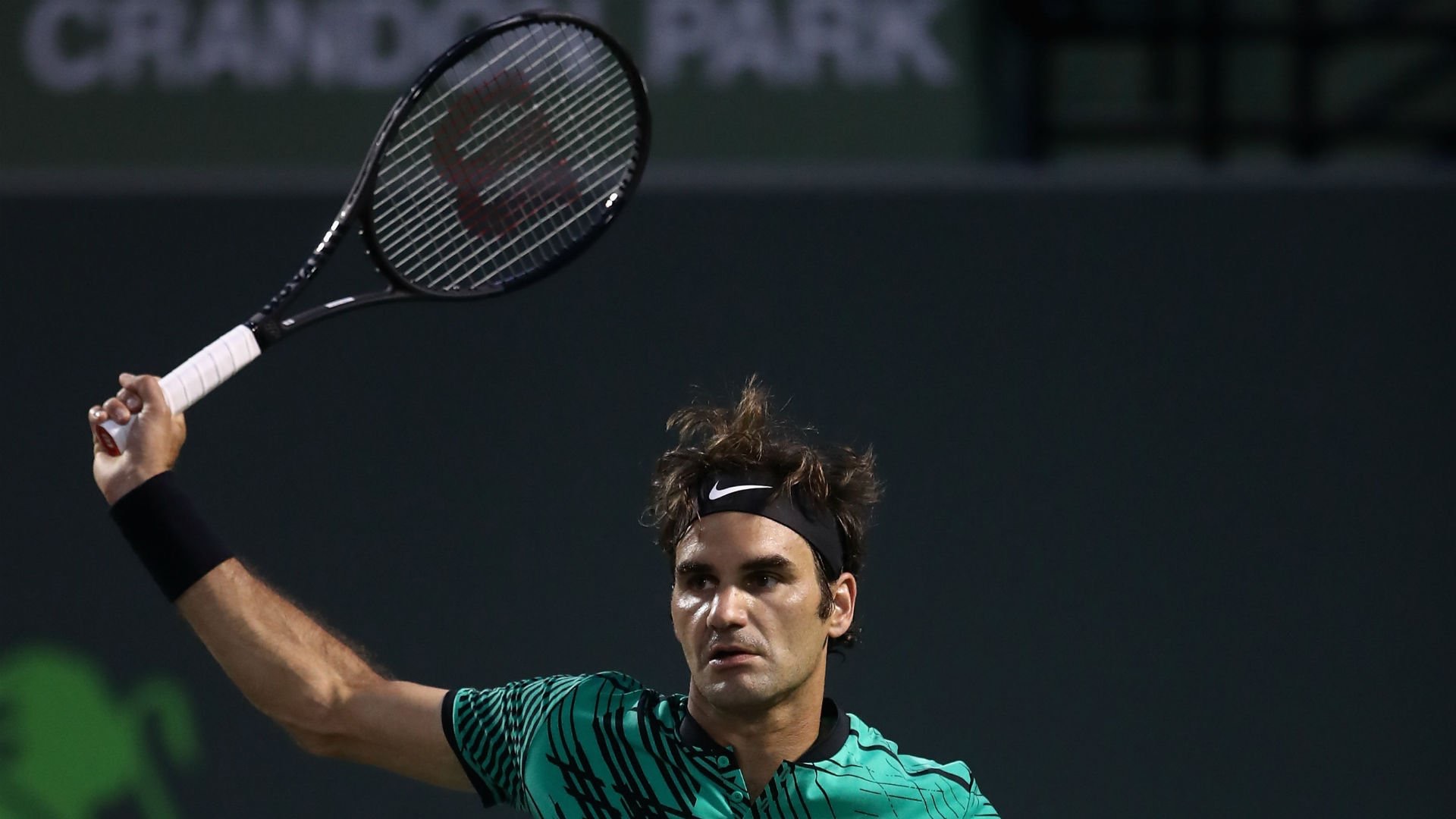 As their first meeting went in Madrid in 2015, Friday night’s semifinal also would go the distance, all three sets, all tiebreaks. Federer flicked a scintillating backhand flick down the line for a winner to start the final set tiebreak, but Kyrgios’ lethal serve kept him even, until 3-all. Federer approached the net with a forehand, and handled the all-out full-power forehand from Kyrgios for a volley winner. With Kyrgios serving at 5-4, with two serves for a place into his first Masters 1000 final, Federer read well on his forehand return to win the point, leveling the tiebreak at 5-all. Unnerved, Kyrgios went for a big second serve, resulting in a costly double fault. Federer then needed just one swing, and with an unreturned serve, clinched victory, 7-6 (9) 6-7 (9) 7-6 (5). Kyrgios smashed one final racket as he walked up to shake hands, and Federer sealed his place in Sunday’s final at the Miami Open. The Swiss maestro will face Rafael Nadal, in their 37th career meeting. Federer is seeking his third title in Miami, while Nadal is seeking his first. It is their third meeting this year alone, with Federer winning both earlier this season (Australian Open final, BNP Paribas Open 4th round).

“It did feel very good, because you don’t very often play three breakers in a match. It’s nice to win those and winning breakers is always such a thrill,” said Federer. “It’s great winning this way, especially because I remember the loss against him a few years ago, It was rough. It was the birthday of my boys. I wasn’t with them and had that match, so it was nice to get this one tonight.”

“I feel like there is a mountain to climb in Rafa. He’s hasn’t won this event before. He’s definitely feeling fresher than I feel right now. But that’s not a problem. I’ll be ready on Sunday,” said Federer. “It’s definitely going to be very special playing Rafa here again. I’m thrilled for him that he came back as well as he did after the comeback and the struggles that he had last year. It feels like old times. We’re playing each other every week now. We can’t get enough of each other. Hopefully it’s not our last match.”

Federer and Kyrgios have played six consecutive tie-breaks in their two FedEx ATP Head2Head meetings, with the rivalry now tied at 1-1. This is the seventh time (5-2) that Federer has played all tiebreaks in best-of-three set matches in his career. This was also the third time that Federer has won back-to-back third set tie-breaks in the same tournament (2005 Dubai, 2001 Rome).

A standing-room only crowd came out to watch two of the most exciting players on the ATP World Tour in Federer and Kyrgios do battle, and they weren’t shy about letting their feelings be known. Whether it was giving a standing ovation for a between-the-legs winner from Kyrgios or chanting Roger’s name, their enthusiasm prompted the umpire to call for quiet on multiple occasions during the match.

Roger on playing Rafa: "He should have a Miami title…it will be special to play him" pic.twitter.com/PfFKesFz0X