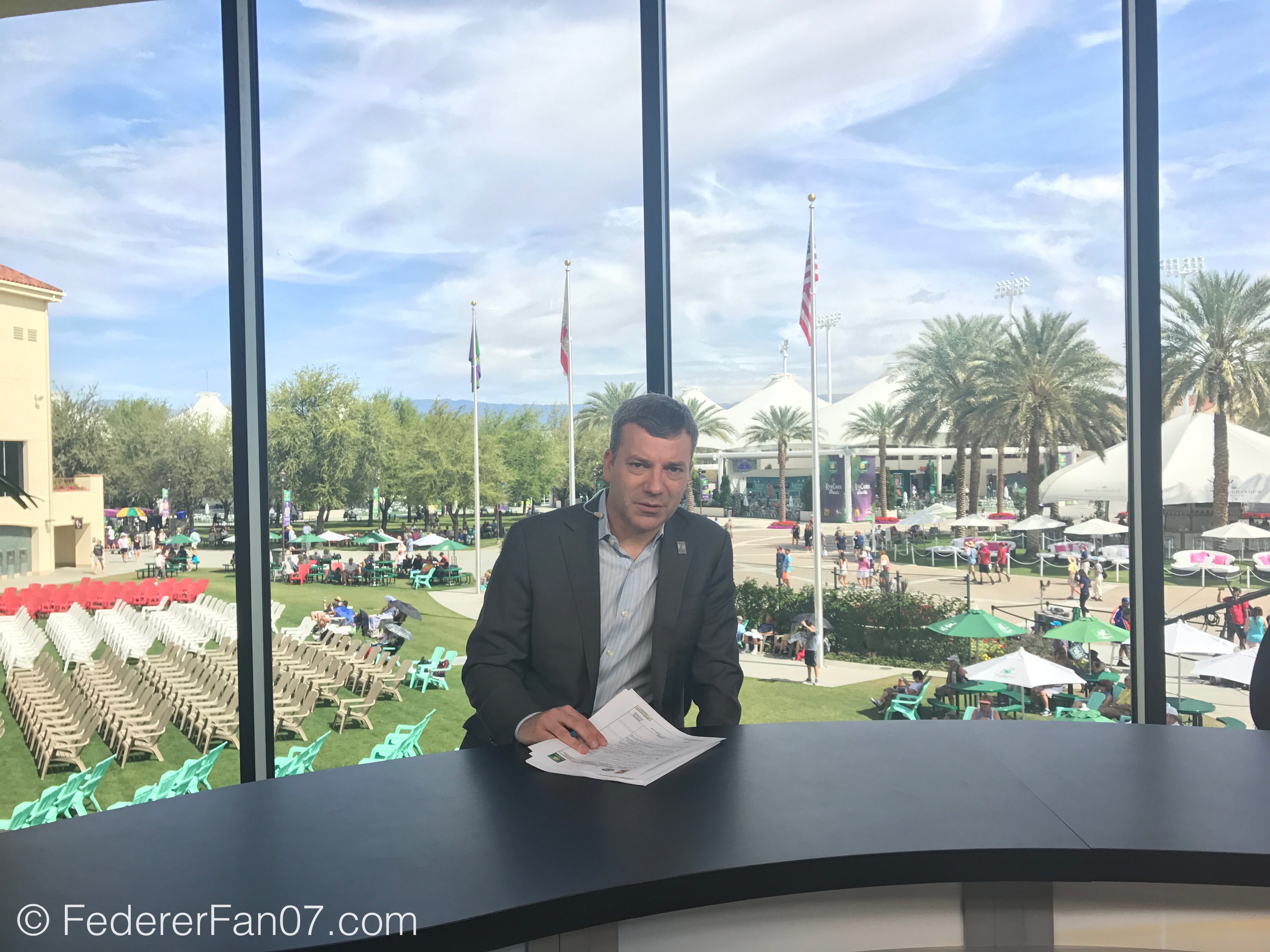 Jon Wertheim Interview from Tennis Channel Set in Indian Wells – Jon Wertheim, Executive Editor and Senior Writer at Sports Illustrated, is one of the most accomplished sports journalists in America. Wertheim is also a commentator for Tennis Channel, and took time for a brief interview with FedFan at the new Tennis Channel studio at the BNP Paribas Open.

Starting off in the moment at the BNP Paribas Open, who are your three favorites to win the tournament for both the men and women?

Oh man, umm (FedFan: Andy Murray’s out) yeah, we’re not going to say Murray, don’t tell anyone we’re tracking this, umm, I think Djokovic still has, you know, on his record here, deserves the nod, probably the defending grand slam champion (Federer) deserves a nod, and, (sounds like) I’m going to be boring, no, uhh, Nishikori, well who’s an outside surprise?

Nadal’s playing right now, what’s an off the board pick I want to give you (FedFan: Alexander Zverev?) alright fine, Alexander Zverev, the breakthrough is coming, came very close last year, let’s see what he can do this year. Zverev, Djokovic, and Federer.

Pliskova, Kerber out of courtesy, I’m not sure I believe it, and I think, honestly, I think Madison Keys has a shot here.

Please share a few thoughts on the tournament’s evolution over the years, as long as you have been attending, from renovations to Larry Ellison taking over ownership to and Tommy Haas graciously taking the helm as tournament director. How has this kind of effort and investment into a tennis tournament rippled to the rest of both the ATP World Tour and WTA Tour?

Oh, that’s a great question. I mean, every year, there’s a new addition, obviously the resources are unique in this case but I think this has become a benchmark tournament for all the others. I think a lot of other tournaments see not just the improvements here but see what this has done to the player field, what this has done for attendance, I mean this event could, this could close to drawing close with the French Open draws. It’s really become a destination, this whole sort of, fifth slam designation is a little bit arbitrary, but you compare it in terms of field, in terms of attendance, facilities, it’s got to be pretty close. I mean, I think there’s a lot of tournaments that wish they had these sorts of resources, but I think just, in little, you know, maybe you don’t have the means to start your own on-site tennis museum, but little touches go a long way. I think a lot of tournaments, I know the US Open has a lot of representatives here, looking, why do players love this event so much? What are some ideas that we can take back with us? So this is definitely a standard setter. 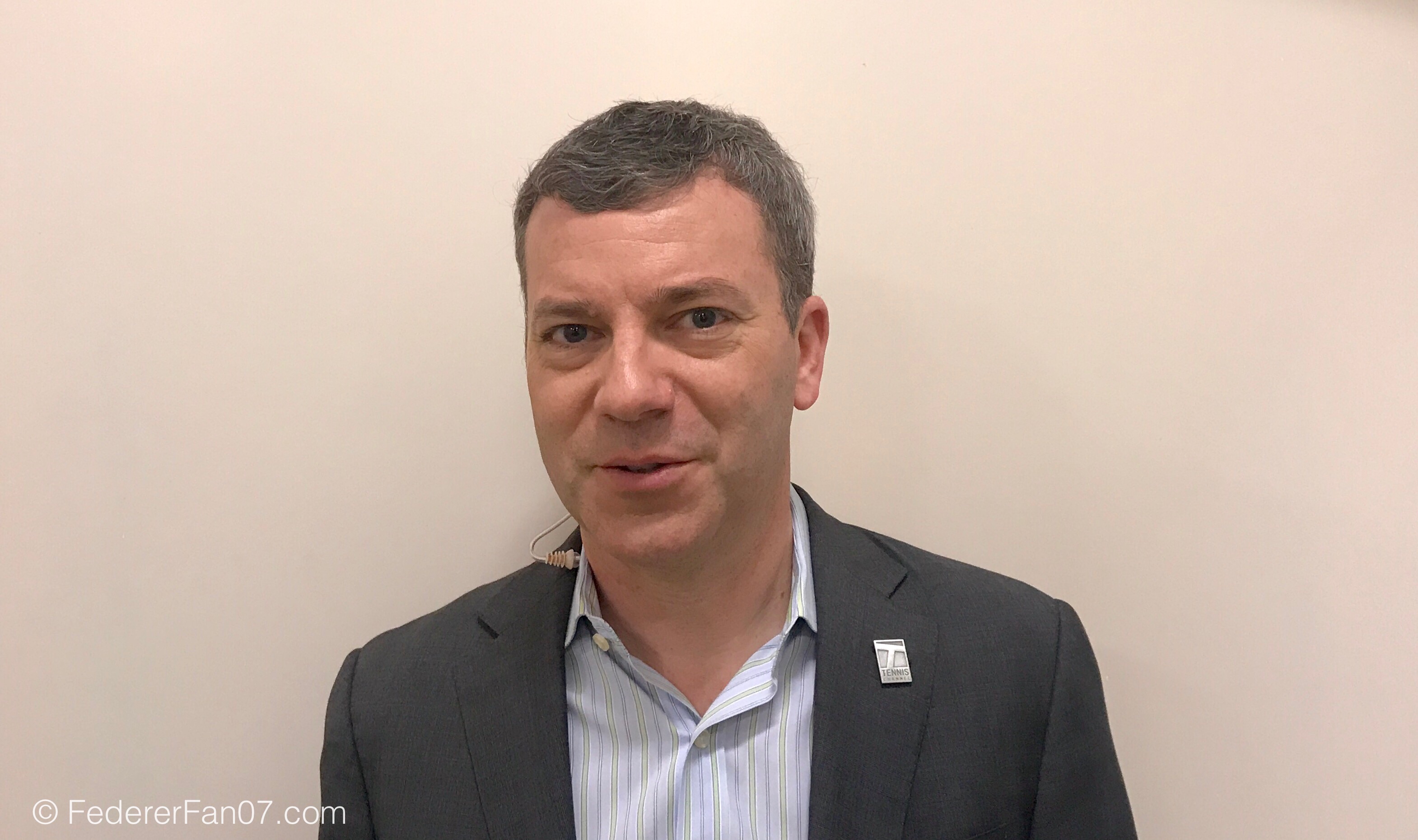 It’s not common in most sports to see their superstar players speak kindly of their adversaries. Well beyond Roger and Rafa in their continuous humble words and praise of one another, as just one example, what makes tennis players so classy in how they compliment and respect each other, even after fierce battles and heartbreaking losses?

Yeah,…I think, some of it is the sport’s history, I think some of it is, gosh, if Roger and Rafa can have this rivalry, 18-14 in majors, and it’s 10+ years, if they can have, not just civility, but I think a genuine warmth between them, we should be able to (as well); also I think there’s some collective tennis against the rest of the world, just a sense of, listen, we may be on opposite sides of the net but we’re all in this together, we all want this sport to do well. We’re sort of, partners at some level. I think, you know, honestly I think it’s more common on the men’s side than the women’s side, but I think, umm, it’s a very nice feature of tennis. And LeBron, and Steph Curry (NBA), that’s a team sport, you would think it would be more intense and sort of more, umm, rivalry would be sharper than individual sports, but tennis players tend to speak very well of each other. I think some of it is, why would you give the other guy more motivation, why would you say nasty things and have them be more excited to play against you and beat you. Some of it is just rope a dope and just does no good strategically, to speak ill of my opponent I’m going to be facing. But I think there’s a sense of, we’re opponents of a tennis match but we’re all part of the same traveling circus together.

You’ve written quite a bit on scoring in tennis, particularly the idea of switching to best of three set matches in the earlier rounds of men’s matches in grand slams. How about a 20 or 25 second shot clock in every tournament, starting with ATP 250/500 tournaments?

Yeah, I mean it’s crazy there’s a different timing between points, from tour events to the majors. I think part of it is attention spans, and we all love tennis, but do we need five hours of tennis, maybe not. It’s also an injury (risk). I don’t like the shot clock will necessarily help, if anything, it gives you less time to recover in between points, I just think it’s crazy at a time when, you know, players have never been, we always here this, never been more physical, that’s why the field’s getting older, you need the physical base, why are we making these guys work as hard as they are. I don’t know if time, if anything players probably want an extra five to ten seconds between points to recover. I think, just best of five tennis, and we see this in Davis Cup, looks like it’s going to be best of three, I think people are coming around. And if you say, listen, we need best of five for these classic matches, for the Australian Open final, alright fine, the last three or four rounds of majors suddenly go to best of five is not a huge adjustment, but it just, you know, even here, I mean look at the players, Raonic isn’t here, Sloane Stephens isn’t here, I mean it’s, why, why are we doing this to ourselves.

For the women, let all slams be best of three sets with tiebreaks in all sets, for the first six rounds. The final..

Just play it out..

..is then best of five sets with no tiebreak in the final set.

That’s true, you would only have it in the final of a grand slam, alright, but I mean, I like the tiebreak (in all sets), shootout, but I just think three vs five is the issue. I also don’t think, we had our 70-68 (Isner vs Mahut) and it made for a big story, and I think, in some ways, it becomes a bit cartoonish.

Let’s talk about Roger Federer’s 18th grand slam. Considering the six month layoff, having come very close a few times in 2014 and 2015, and always being up there giving himself more opportunities; seriously speaking, Australian Open back in January, at what stage did you believe, he might just win #18?

I think pretty early, honestly, he had a rough first round or two, match against Noah Rubin, where he looked a little…then that match against Berdych, was just, lights out, this was like tennis, this was like Federer circa 2005 again, 2006 again, and it didn’t, you know, Djokovic out in round two, Murray out early, in the middle weekend, you looked at the way the draw was opening up, how little time Federer had spent on court, he had a five setter against Nishikori but it was in, sort of, reasonable time – I think by that middle weekend everybody was thinking,..

Even with Rafa still in, on the other side of the draw?

Yeah, but if you remember, Rafa’s, hadn’t, been to the second week of a major in more than, about a year and a half. I think it was when Djokovic went out, and when that Berdych match, it was real turning point, because that was just, clinic tennis, it was also under an hour and a half…

Yeah, that was something. So yeah, I don’t think, uhh, just after four, five days, (we all thought) Roger’s got the chance here.

At BNP Paribas Open media day, Roger Federer said he very much still feels he is in the comeback mode, even if that comeback has already included a grand slam title. While he still has not quite shown how he will play in a tournament where matches are back to back days as they mostly are, outside of the grand slams, how do you see him playing (scheduling and performing) this year?

Well, yeah, I think he’ll probably choose his tournaments, rumor is, he may…clay may go entirely, by the wayside. I think he benefits from night matches, you know, Nadal is out here (playing in Stadium 1) slogging it out in, 96 degrees, you know, it’s not going to be 96 degrees when Federer plays tonight. And, the days off, I think are key, sometimes to get them at masters series events, sometimes you don’t. This is his first masters series event in ten months, so umm, but I think, you know, athletes sort of, tell themselves all sorts of, narratives, to uhh, help keep expectations low. I can’t imagine an 18-time grand slam champion, fresh off winning the previous major, is uhh, too much in comeback mode.

Many analysts, critics and experts didn’t think he could win #17, and they were louder in politely saying they didn’t think he would ever win #18. While he isn’t in his prime youthful years anymore, do you think Roger will win #19 before he decides to call time on his tennis career?

Oh…yeah absolutely, some things have to go right, I would say, no I,…would you, who would pick against him at Wimbledon? (FedFan shakes head no..) Murray’s in a little bit of a funk, uhh, Djokovic is in a little bit too, sure, a lot has to go right but a lot can go right, I would say, probably one is more likely than zero, zero is more likely than two. How’s that?

Two years ago you might not have said that

Yeah, no, I think a lot of us said it’s been great, and if Roger can stay around it’s a bonus, it’s all gravy, and we’ll see what he can do at Wimbledon. But umm, again that was the thing about Australia, wasn’t like, I mean he, somewhere out there was a stat that if Murray hadn’t lost to Zverev, Federer may have beaten five, top-ten players, out of seven matches, but as it was, he played (and beat) four. So, but it never happened before. He’s going to manage his schedule, he’s going to try and stay healthy, I wouldn’t, I wouldn’t pick against him on grass right now, I tell you that.