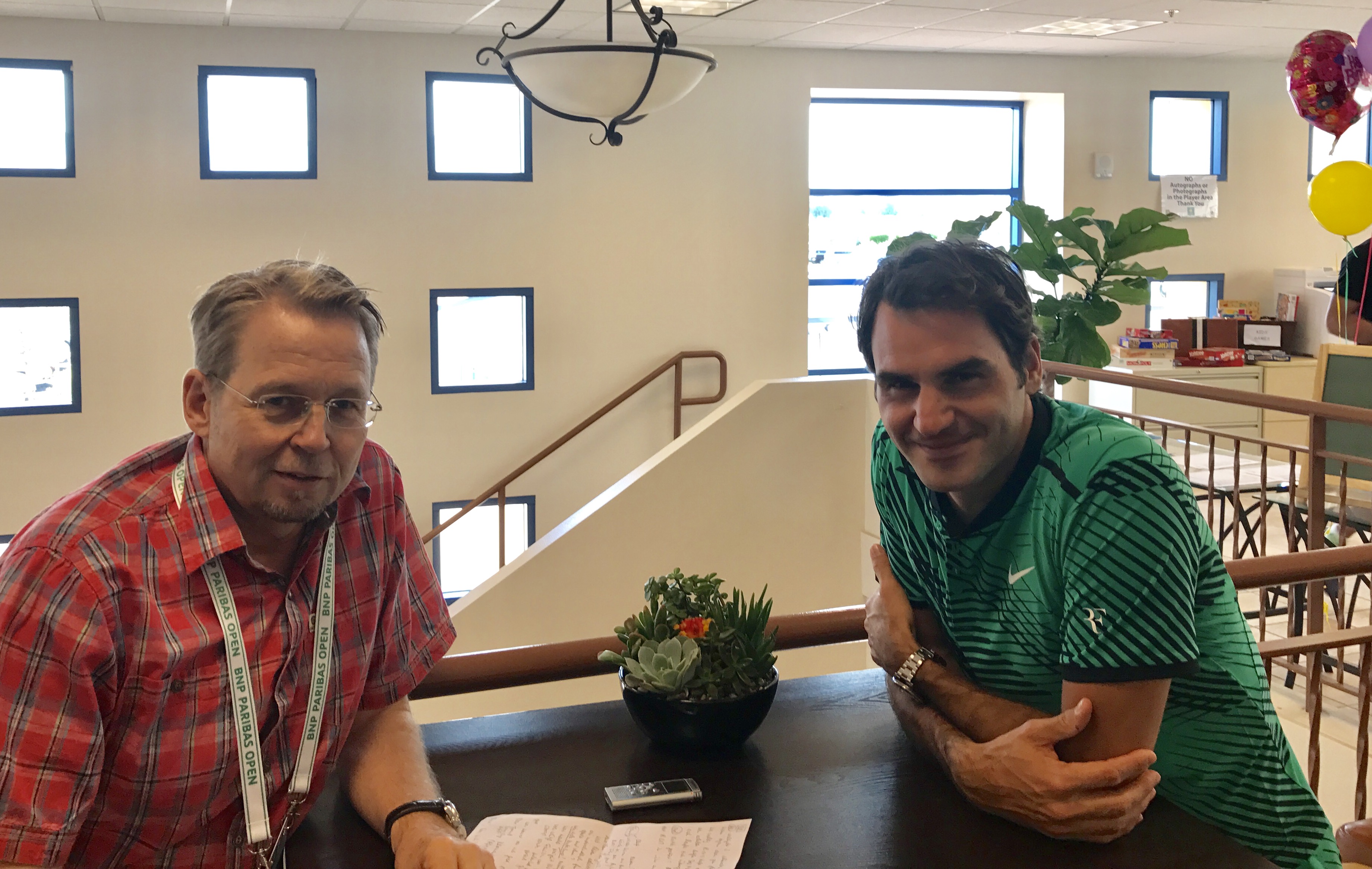 René Stauffer 2017 BNP Paribas Open Interview – René Stauffer is the tennis correspondent for Tages-Anzeiger, the leading German speaking paper in Switzerland. A sports writer since 1981, Stauffer is the author of “Quest for perfection. The Roger Federer Story.”

After first writing about Federer in 1996, Stauffer has traveled the world covering the Swiss maestro. He has covered 90 grand slams and counting. To add, in my personal opinion, Stauffer is the premier Swiss journalist covering tennis and it was an honor to be able to have some of his time for this insightful interview.

Last year in July, when Roger announced he was not going to play for the rest of 2016, what were your initial thoughts? What did the Swiss media and press think of it, generally speaking?

I think in Switzerland we were well informed, so, I called Tony Godsick, and the first thing he told me was this was really an investment into the future, a time out basically, to prolong the career. We knew, I knew Roger well enough to trust it, this is true, because he didn’t like to play this way (lack of practice/preparation) all along. He’s a guy who does things right. If he decides to do something, he doesn’t do it, you know, in between, so, it was a typical Federer decision, and I knew that the love of the game he had to come back, to try everything to come back. So, I think in Switzerland, there were, people who are interested in tennis, they didn’t expect that this was the end of his career.

Stan Wawrinka has almost always flown under the radar compared to Roger Federer. His laser focus has led him to win a grand slam each of the past three years. What has changed in his game and approach to tennis to you?…Maybe besides Magnus Norman becoming his coach

You name it! Magnus Norman becoming his coach, it made the big difference. It was a new chapter starting when Magnus came to him for the first time. They made a program, and at the end of the program he (Norman) wrote, ‘World Tour Finals,’ and Stan said, ‘what? I’ve never been to the World Tour Finals,’ and you know, Magnus said ‘that’s our goal, you’re going to make it.’ It started a whole new, chapter, perception, of who is Stan Wawrinka, he could be top ten or more. The way they worked together ever since, has been another level. What changed in his game, obviously was his forehand, it’s, I don’t know, it’s the most improved shot I’ve seen in a long time. He of course also has another mentality, believes so much more in himself. He knows he can do it. He was the guy who always lost very close matches, and never made the step, and suddenly he made it, you know, when he played Djokovic in Australian Open, big matches. He became aware of what he’s capable of, and ever since he knows that, he’s just uhh, thriving on that. 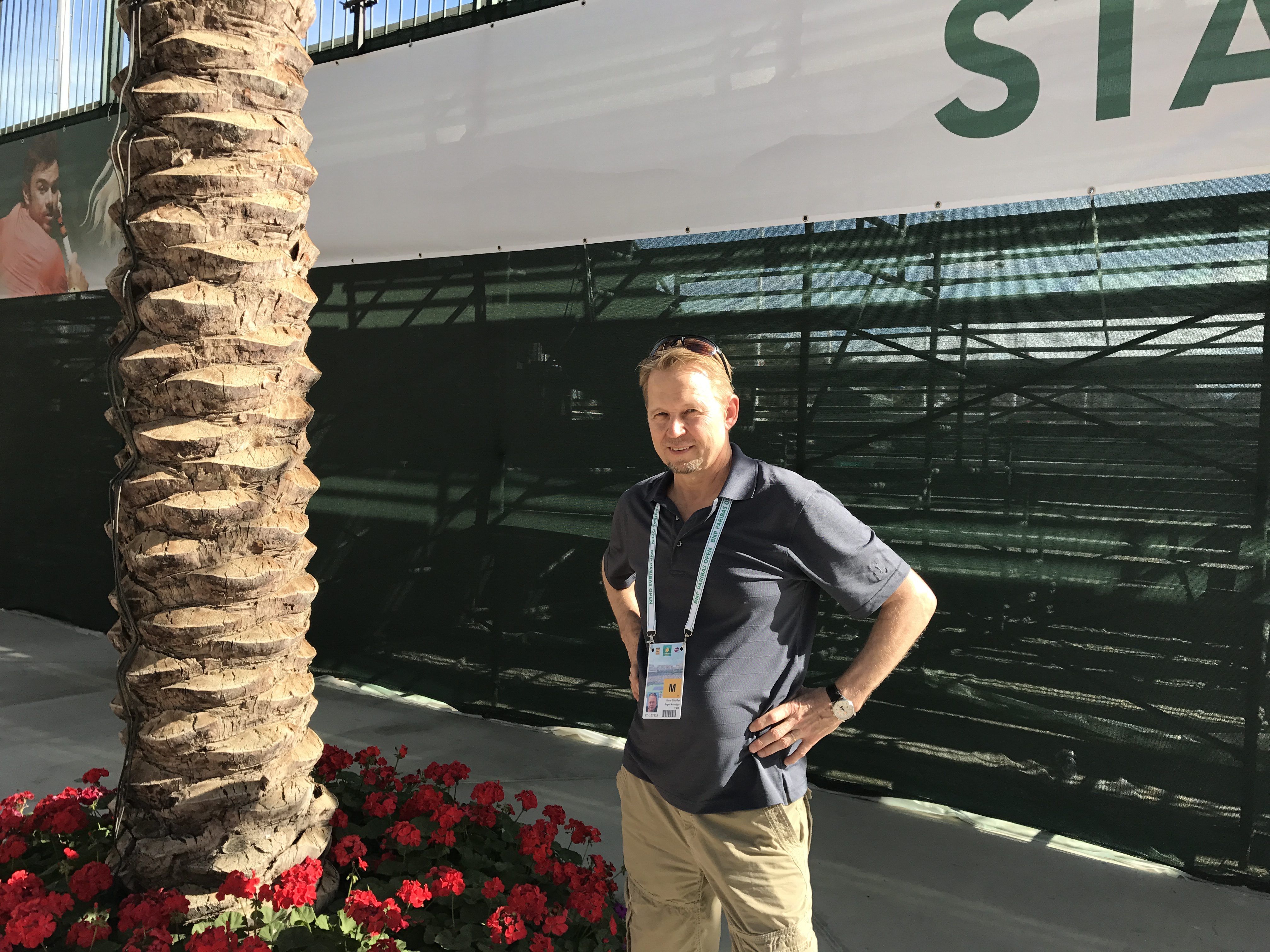 Let’s talk about Severin Luthi. He has been the Swiss Davis Cup captain for well over a decade. He has also been Federer’s long time coach, and main coach, through the years as Jose Higueras, Paul Annacone, Stefan Edberg, and now Ivan Ljubicic compliment the team. How massive has Luthi’s experience and guidance been to Federer’s success?

That’s a good question, but I’d say, I would put it the other way, I would say that through Roger, Severin Luthi became who he is now. In the beginning, he was not that old, not that experienced, he came into the team, he was on the Davis Cup team, he helped Martina Hingis in the beginning, had a very good reputation, also as a team coach in club Swiss championships, and then he grew into this, into this relation with Roger the grew closer and closer, and his standing improved, and he really grew into this, and I think now he’s the guy who knows Federer the most, who has a very good approach to tell him what he thinks, his opinion is valuable for Roger, because he doesn’t have to say something just to please him, and nobody does, but I’d still say that Pierre Paganini (Federer’s fitness trainer) is more underrated, in his team, because he never shows up at tournaments people don’t know his face. But he has a very good, long term planning (with Roger), which already started twelve years ago. He’s a very, very intelligent advisor, and of course he’s also working with Stan as well, so look at them, look at how they move, how fit they are. Ask anyone how important Paganini is and they will say, is of the most importance. I don’t want to take anything away from Seve, but Seve, gets a lot of credit, he led Switzerland to the Davis Cup title, the first, so, he gets his credit at least in Switzerland.

What was it like in Switzerland following Federer winning his 18th grand slam? Did you believe he would do it this season, before he retires, or not at all?

Talking about me, I still gave him a chance, I always thought that his career is not complete. He has such a strong career, and after turning 30, he’s still so strong. The last four years I always say, he’s the strongest player who didn’t win a major, since Wimbledon ’12. I thought it was a question of time that he might get one, if all pieces come together, but not this year, and not likely against Rafa in the final. You would always think that the fairytale story would have it’s ending in Wimbledon, or maybe we’ll still get it? (laughs) Who knows.

How long do you foresee Federer playing?

I can’t judge it, I think as long as his body works with him, which is a big question mark, he will go on and do it. As long as he’s competitive. He’s signed a new contract, three years with the Swiss Indoors (Basel, contract through 2019), which shows that he even might play, some tournaments, even if he does not play a full schedule he might still consider to play where he likes the most to play, or it’s convenient for him like Halle, or Basel, I could imagine that, but nobody knows, I think even him doesn’t know.

But just to come back to the first question, Switzerland was crazy! See, I was in Melbourne, but what I realized was that, the best, it was the biggest impact that any major title ever had, from Roger.

Of all 18, because people didn’t expect it. It was our January, a Sunday, it was in the morning, it was Rafa who everyone knows, and they felt that, he could win, so it was an amazing audience on the tv, and me personally, I met nobody who didn’t watch it. Nobody.

Many analysts, critics and experts didn’t think he could win #17, and they were mostly respectful, but more vocal in saying they didn’t think he would ever win #18. While he isn’t in his prime youthful years anymore, do you think Roger will win #19 before he decides to call time on his tennis career?

At the moment I would think that, it’s a very good possibility. The big step was, to get this 18th. And now, it’s the whole pressure, is gone, look at the way he’s playing, the way he’s acting, he’s so freed, he’s like, liberated. And now, now he knows that he can do it, and that makes him very dangerous I would say. Depending on who he’s playing, how the other guys are going to play this summer. But you see, one slam usually helps pave the way for the next, so it could be very close. It could be this year that he even gets another one, and then of course he would like to get 20, that would be a nice number. But, let’s just enjoy #18, I’d say.

That brings up a follow up question. What kind of pressure had built up, that you say #18 has brought relief. Roger does indeed look more relaxed, even compared to his normal relaxed self. What was building up in that pressure, was there something there of an expectation to him that he was supposed to have already won his 18th grand slam but had not?

Yes, I talked, I had a nice interview with him and I asked him, I told him, ‘Roger, seeing you play now, the way you do, don’t you have the feeling of not being so free in the three grand slam finals against Djokovic’ – he didn’t look that free to me, and then he said, ‘maybe, it’s possible’ – but he didn’t feel he played badly. Of course he’s the guy who wants to win. I think the pressure is not coming from inside. It came from all the questions. You get tired hearing all those questions, ‘can you win?’ ‘what do you think?’ – and you start doubting yourself. But he didn’t believe he would win that one, in Australia, and that is the thing about it.