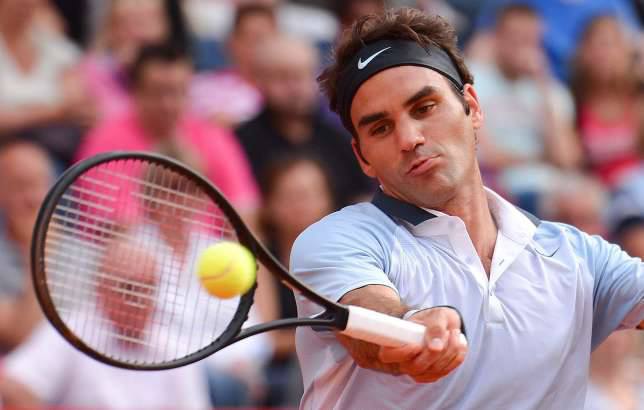 In a telephone interview with Andreas W Schmid for bazonline.ch, Roger Federer talked about his week of training with Stefan Edberg, the new Boris Becker-Novak Djokovic coaching relationship, expecting his third child, Davis Cup, and the new racquet he will be playing with in 2014, starting at the Brisbane International. Details on the new racquet are vague, quoted as being “a similar model as in my first attempt.”

In the last few weeks you surprised your fans with some great news. So with the announcement on Christmas Eve, that you are going to become father for the third time in 2014. When will that happen in 2014?

Federer: As this is something very personal, so, I won’t like to talk about the details in public. Most important now is that every thing goes well and just as last time, Mirka will again experience a good pregnancy.

Back in 2009, she was present at Wimbledon final in that dramatic 5 setter final against Andy Roddick and that too in the eighth month managed to handle it quite easily. It’s fine so far. Let us hope that it stays that way.

Federer: We are flexible enough to respond. That’s the good thing about the tournament calendar of ATP that you can react quickly to something. If a report is important, then I can may be, play just less and a few weeks later moreThis year (2013), I also added spontaneously tournaments from Hamburg and Gstaad in my program. Such short-term changes are also possible at any time in the new 2014 season.

What do you think: How will this change for you be as a future father of three instead of two children?

Federer: I do not necessarily think so. Answering this question is anyway until six months or perhaps a year after birth. I still remember how we thought before the birth of our twins: this is excessive. And then it went very well. And now it is getting easier, as they get older. Therefore, I have much less fear of what may come to us in the future, than it was then.

Surprising were the news that you worked together during the preparation with Stefan Edberg. How did that happen?

Federer: At some point, I had the thought: Would not it be an incredible thing if my former idol spends a week with me? Thereafter, if nothing else looks out there, so what! We have spent at least a few interesting days together, talking about my tennis and maybe get one or the other inputs from him.

Edberg handled my questions very well, inspite of the fact that he has little experience as a coach and that was something new for him. But he makes up for the coaching experience, with the many experiences that he has had throughout in his career. I was really pleased, when he agreed to join us for a week in Dubai.

Will Stefan Edberg will be a permanent part of your coaching staff/team?

Federer: No, that’s not the case. We will need to discuss this more closely together. But there is a way that we would be happy of course, if he can find a a few weeks in the new season perodically for us. Otherwise, the coaching staff everything remains the same. Severin Luthi is still my coach, there is no reason to change anything. Pierre Paganini’s my fitness trainer, Stephane Vivier my physiotherapist.

Will your game become more offensive after the involvement of Stefan Edberg?

Federer: No, no. The people have there wrong misconceptions. If you train with Thomas Muster, that does not mean that you in the future will strike all balls three meters behind the baseline. Similarly, you can’t constantly storm to the net and try to volley, if you have worked with Edberg. Each player has his own ideas and his own style, with which he must work. I listen gladly and was always glad over the inputs of my former coaches. I had to implement those ideas myself. In addition, I have my ways not only going in the game forward, but also backwards. So, I think, I’m an interesting player to coach :).

What impresses you most about Edberg?

Federer: The way he plays his volleys, I’ll never be able to. He spent his whole life tennis in front of the net and earned his success. I have met Edberg quite a few number of time in the past few years and was never disappointed after meeting him. He always behaves incredibly well and has a positive attitude and joy of life. This is important to me.

You could have also worked with Boris Becker?

Federer: Yes, but I was a tad late (laughs). He was already gone.

Your first reaction when you heard that Boris Becker will be the head coach of Novak Djokovic?

Federer: When ever I & Boris meet, we have always a chat together. Nevertheless, I too was probably as surprised as everyone else. I did not expect that he would return to the tennis front first and foremost. And that, he once again would like to travel so much and be present daily on the training ground. Although I know, he has been a commentator in many matches for Sky and at Wimbledon for the BBC.

Boris Becker now lives in England. Also because he feels misunderstood in Germany. Most of the comments (by Tennis pundits) actually varied between vicious and bitter about new job as coach of Djokovic?

I’m sorry about that. He did great things on the court & no one can deny that. Becker had a great career. What ever happened post that, is his personal matter.

Andy Murray is working with Ivan Lendl together, Stanislas Wawrinka with Magnus Norman, Djokovic with Becker, you get advice from Edberg. Is this the new trend in tennis that you unite with the stars of the eighties and nineties?

Federer: I can speak only for myself: with Stefan Edberg I can talk on equal footing. He was himself very successful and knows what it means to play at the top. And I found it really exciting to talk with someone from the generation of players that you have just mentioned. Previously I apart from Peter Lundgren, never worked with a player of that great gene­ra­tion. Paul ­Annacone, Tony Roche, José ­Higueras are all a bit older.

In the summer you abandoned your first attempt with a larger racquet after an early exit in Gstaad. Now you have again tested the new racket in preparation for 2014. Thus, you will be using that on the tour in 2014?

Federer: Yeah, I’m going to play in Australia with a similar model as in my first attempt. Actually, I wanted to take the test (of playing with the bigger racket) right after the U.S. Open again. But then I had so much to do with myself and my game, that I kept it on hold.

Well, now, I had more time to make more small changes and together with my supplier company Wilson worked on the fine details of the racket.

You could also say, ‘Why should I change something in my racquet, with which I have had so much great success?

Federer:It is a fact that the sport of tennis is constantly evolving and the racket technology with that. Nevertheless, one must always twice consider whether to change something about his racket.

Because the Club is extremely important. But now I have the feeling that this is the right time for a change in the racket. I’ve played through two and a half weeks with the new model and am confident. The Racquet is very good in the hand. But the truth will come out on the court. We’ll see how it affects me in the tournaments in Australia.

The Swiss star will make his first appearance at the Brisbane International, which begins December 29. Following that and leading into the Australian Open, Federer will take part in an exhibition match with Jo-Wilfried Tsonga, “A Night with Roger Federer and Friends,” to be held at Rod Laver Arena on January 8.