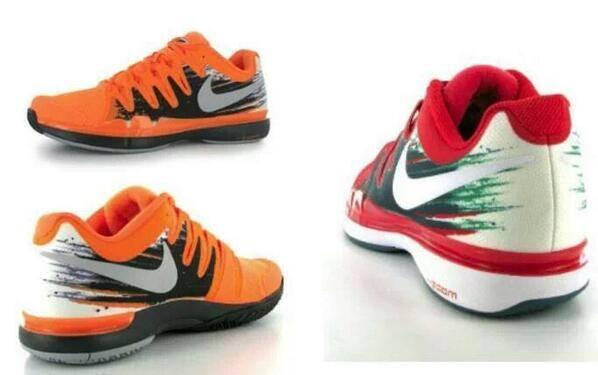 Roger Federer surprised a special fan and his followers on Twitter when he retweeted a leaked photo of his upcoming Nike shoes for 2014. The Swiss maestro will be sporting all new gear for the new year, at this time, assumably the Nike Zoom Vapor 9.5 Tour (or 10). Avid fan @BerfinRF‘s photo from the future shows what Federer will wear for two of the major tournaments early in the season.

At the 2014 Australian Open, the Swiss star will wear red/white/dark green, while the version for Indian Wells is predominantly orange. Prior to the first grand slam of the year, taking part with Jo-Wilfried Tsonga, Federer will host an exhibition at Rod Laver Arena, A Night with Roger Federer and Friends.

While his official 2014 schedule is yet to be released, the 17 time grand slam champion will start his year in Australia, kicking off his campaign at the Brisbane International.