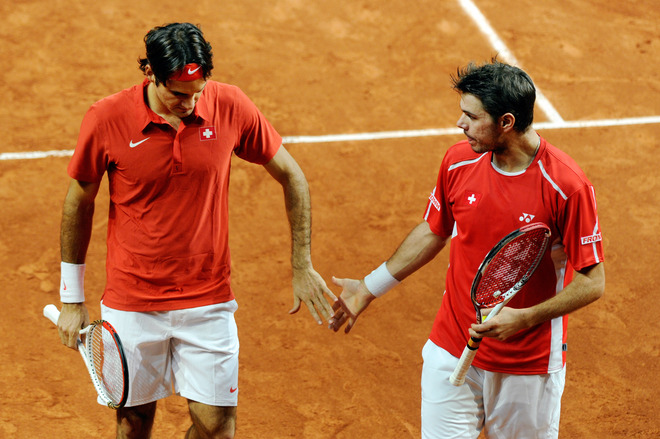 Saturday’s doubles in Fribourg had the Swiss facing the brink of defeat. 2008 Olympic gold medalists Federer and Wawrinka took on Mike Bryan and Mardy Fish, with team USA looking to sweep. Although the Swiss duo won the first set, the Americans came back to even the match, and steadily marched onward to hand a shocking defeat, 4-6 6-3 6-3 6-3. The favored Swiss have been swept 3-0, and the Americans have clinched one of their most remarkable road wins in Davis Cup history.

Federer looked fed up, and the partisan crowd was disheartened as they sensed defeat. A few moments caused the fans to show frustration. Both Federer and Wawrinka were hit by volleys from Mike Bryan. It was simply not a good day or weekend for the Swiss, who had great opportunity to advance in the world group of Davis Cup this year.

Federer, after the match, with paraphrased quoting from Rene Stauffer (@staffsky on Twitter).

“We played good, but they were a touch better. We have to give them respect, they did really well.” “Unfortunately we have not much choice regarding stadiums. Would have preferred slower clay, but nothing we could do.”

Federer still intends to play in Rotterdam next week. He will fly there on Monday.