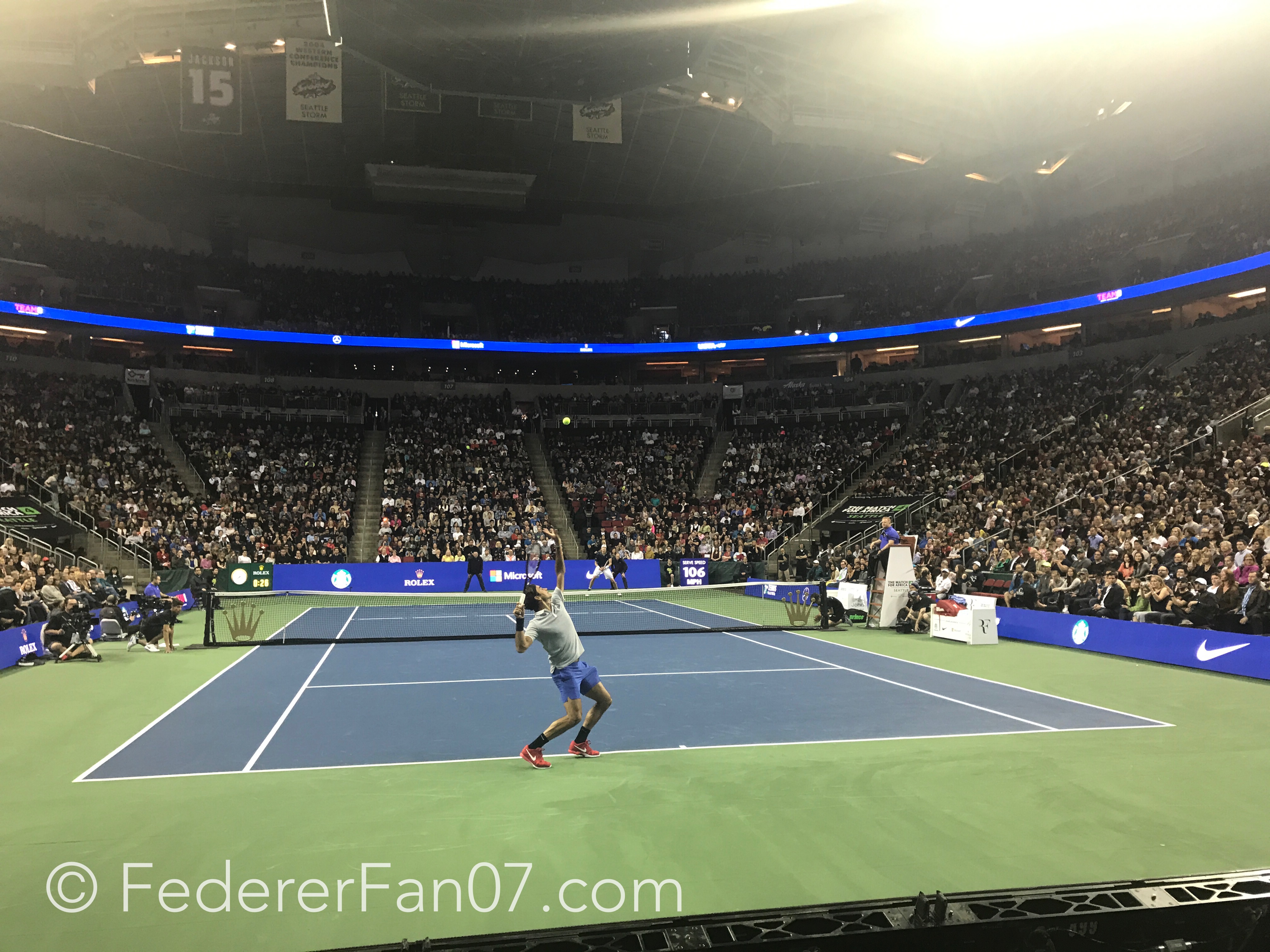 Roger Federer defeated John Isner 6-4 7-6 (7) after teaming up with Bill Gates to top Isner and Pearl Jam lead guitarist Mike McCready 6-4 in doubles. However it was not the scores that mattered. It was the cause. All 17,459 seats were filled at the sold out KeyArena in Seattle for a special Saturday night of tennis, coming together to raise over $2 million for Match for Africa 4, the fourth charity match in support of the Roger Federer Foundation. The first three installments were played in Switzerland, featuring Rafael Nadal (2010), Stan Wawrinka (2014), and most recently Andy Murray (April 10).

Watch FedFan exclusive court-level coverage at FedFan Video, including 24 video clips of both singles and doubles from the Match for Africa 4 at KeyArena, Seattle.

.@rogerfederer is on 🔥🔥🔥 Did you see those shots?? 😱 pic.twitter.com/hUMgejH7YY 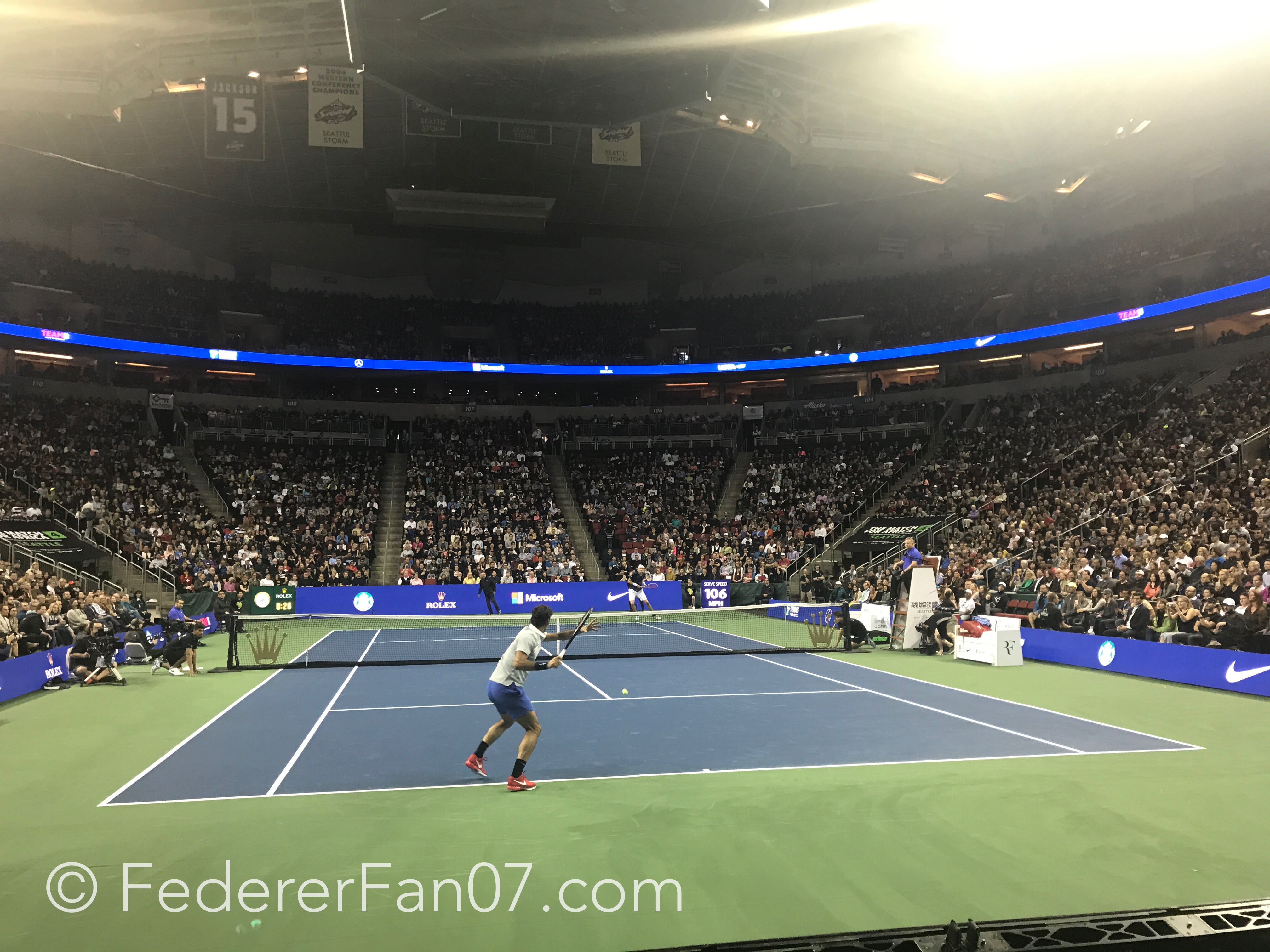 After the match, Federer spoke about how lucky he feels to be back on the tour after missing the second half of last year, and how his foundation began. “I feel very privileged to be back on a tennis court,” said Federer. “Last year was extremely difficult, having had surgery and the knee never healing. Then I had back pain too, and it all got too much at Wimbledon and I was out for six months but was able to spend some incredible time with the family and start preparing for this season and hoping that the work that I put in the off season was gonna really pay off.”

“I was gonna get a second chance to really play tennis again on the professional tour, and so when I did come back in Australia was really exciting for me,” said Federer. “All of a sudden you get in this position where you feel like you really lucky to be playing on the pro tour and maybe you can actually do more and give back,” said Federer. “And i thankfully have some great people in sports or in the world like for instance the likes of Bill Gates and Andrea Agassi who have done so well in philanthropy.”

The 32-year-old American also spoke afterward on what a great evening it was in Seattle. “Incredible special,” said Isner in the on-court interview after taking a selfie with Federer. “I can’t thank you enough Roger for inviting me out here. I had so much fun. This was an absolute blast.”

“The crowd was amazing, everyone. I felt if I would help in just a small way to raise the money for Roger’s foundation, for his charity. It’s been a huge honor for me. Again, I can’t thank you enough Roger. I appreciate it,” said Isner in a humble manner.

Before the match, Federer sat down with Tennis Channel’s Mary Carillo, talking about managing his schedule and his thoughts leading into Roland Garros, for which he confirmed he is on the entry list, and that “the plan is to play the French.” However until actually confirmed to play in about a month’s time, the decision remains to be seen.

.@rogerfederer on success and managing his schedule: pic.twitter.com/hnr4wiMj9r

.@rogerfederer tells Mary Carillo he is entered in @rolandgarros and shares his thoughts on playing on the clay and his take on @rafaelnadal pic.twitter.com/PAziudsf6k

The Roger Federer Foundation has generated millions of dollars for children’s charities in Switzerland, Zambia, Botswana, Namibia, South Africa, Malawi, and Zimbabwe. By 2018, the foundation has set a goal to reach one million children.