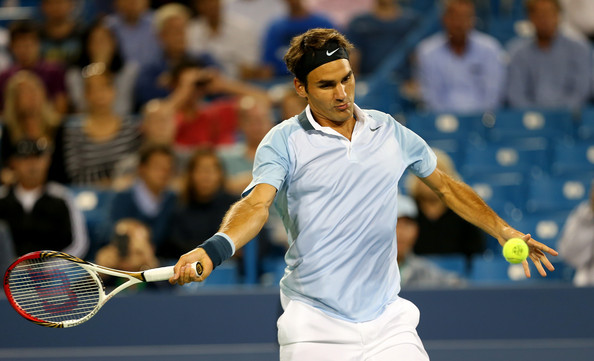 Roger Federer returned to his Wilson Pro Staff 90 during practice this week in Cincinnati, and brought it back on court tonight against Philipp Kohlschreiber. The Swiss maestro had to work quite hard against a formidable opponent, but was able to fight past the German, 6-3 7-6 (7), in 1 hour 26 minutes.

After the match, Federer addressed the interest surrounding his racquet. Although he practiced and played with the black Wilson 98 prototype in Hamburg and Gstaad, he has chosen to play with his Wilson Pro Staff BLX 90 at least through the US Open. He will resume racquet testing in the fall.

“I’m going to do more racquet testing when I have, again, some more time after the US Open,” he said. “I was playing for a month with the black one, but it’s a prototype. At the end, I just felt like, you know what, right now I feel like I need to simplify everything and just play with what I know best.”