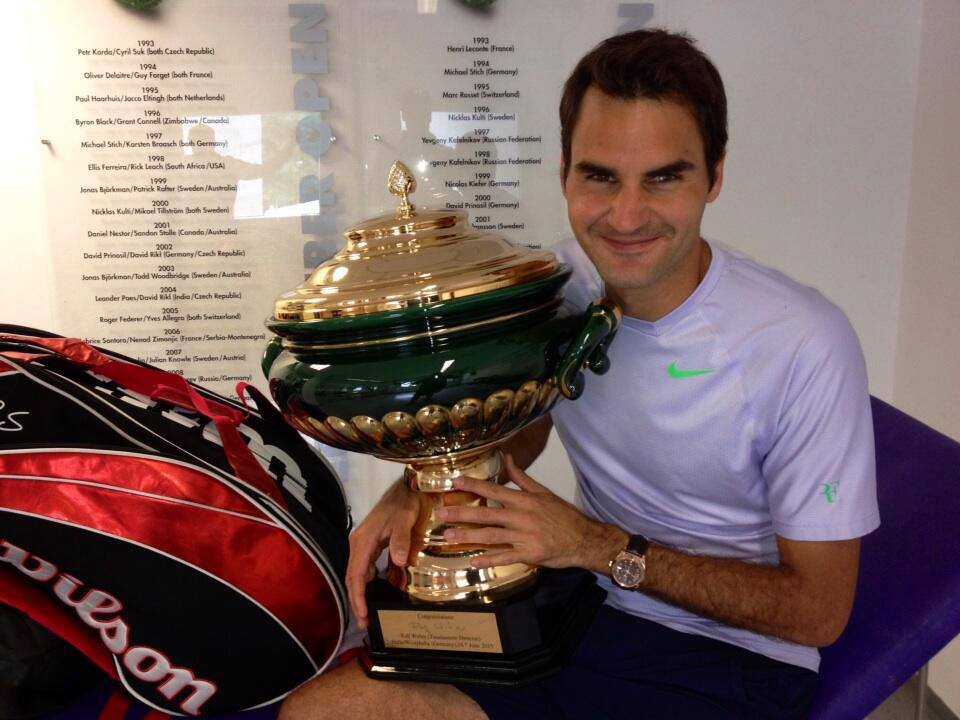 Youzhny took the first advantage of the match, clinching the opening set in a tiebreaker. Federer broke in time, evening the match in nearly no time, before converting the necessary break point opportunity in the final set. From there, the Swiss comfortably served out the match at love, 6-7 (5) 6-3 6-4, winning his record 6th title in Halle and 13th title on grass (Open Era record).

Serving was vital again, as Federer served 11 aces at 66%, winning 80% of points on his first serve. Federer becomes the fourth player in the Open Era to win 77 career titles (and counting) – Jimmy Connors (109), Ivan Lendl (94), John McEnroe (77). He has also won a title for the 13th year in a row. The Swiss maestro now turns his attention to Wimbledon, where he will seek a record breaking 8th title.

“I’m very happy. It was a great week for me and my family,” said Federer. “I thought I played well from the start and I really had to fight for it, in the semis against Tommy Haas and in the finals against Mikhail Youzhny. I think I did well today and they are exactly the kind of wins I need at this part of the season. I’ve been preparing well for this part of the season and I’m happy it’s paying off. It’s obviously important for my confidence looking forward to Wimbledon now.”

“It’s totally different [than 2003],” said Federer. “Ten years ago I went into Wimbledon with so much pressure, even though I had lost in the first round the year before. In terms of needing to prove my point that I was a legitimate Grand Slam contender, I had incredible pressure. Now, ten years later, I know Wimbledon, I know Halle, I know my way around and what I need to do to perform well. I’m going in with pressure because I’m defending my title. There’s always pressure because it’s a privilege to play at Wimbledon and I want to do so, so well. I feel good right now and I hope I can show it on the tennis court.”