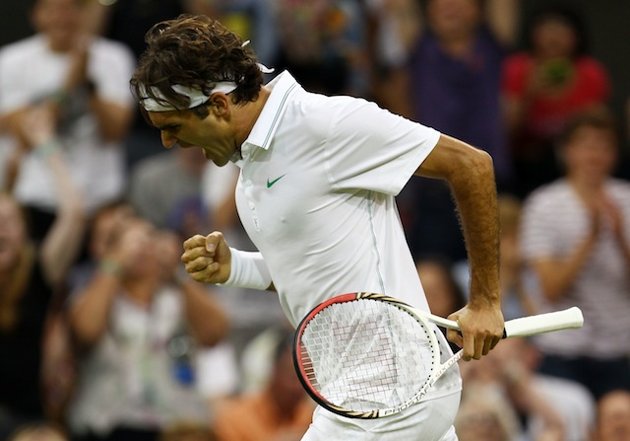 June 2013. The ATP World Tour has shifted to the short part of the season played on grass. Warm-up tournaments are underway in London and Halle ahead of Wimbledon, the prestigiously regarded grand slam in tennis history. Roger Federer is currently ranked third, nearly 32 years of age, standing alone with 17 grand slams. His records are endless, his streaks and abilities will never be forgotten. The Swiss maestro is hailed as the greatest of all time (GOAT). His talent was touted from his junior days and early years on tour. Critics repeatedly wrote about the youngster back in the early 2000s, asking when he would rise to greatness. When would he win the big one. In 2001, he defeated Pete Sampras in the fourth round at Wimbledon. Was this the big match? It wasn’t a step. It was a leap. Ten years ago, Roger Federer won his first grand slam, his first Wimbledon title. Today he is tied with Sampras, seeking a record breaking 8th title within a few weeks.

The elite of his generation are all retired or have fallen in the rankings. The youthful generation from 2006/2007, are in the primes of their careers. Rafael Nadal recently won his 8th Roland Garros title, the most titles any player has won at one slam ever. Novak Djokovic has become a new man since 2011, winning his 6th grand slam at this year’s Australian Open. The same can be said about Andy Murray since taking on Ivan Lendl in 2012 and his first slam at the US Open. The gap may be closing between the big four, and the rest of the top 10. Players like David Ferrer will grind, but on the heels come the power hitters. Tomas Berdych, Jo-Wilfried Tsonga, and Juan Martin Del Potro. Richard Gasquet and Stan Wawrinka have lifted their games lately. The state of the game has become much more physical, even so when compared to a few years ago. Young-guns Milos Raonic, Kei Nishikori, and Grigor Dimitrov are looking to strike success.

In the history of time, all of the greats have rose to the top, and fallen with age. The consistency been has not been maintained late in their careers. Is it inevitable? C’est la vie. Federer however, can push those limits. His versatility has adapted to every change in his fifteen years on tour. The analogy is to a hero. Quick to build up, quicker to tear down. If anything, the Swiss maestro’s career lately has been a majestic fade. The shortcomings in grand slams and big matches have been gradual, by round, by player, by the manner in which it happened.

A lot is in question for the Swiss now as the season is halfway complete. Federer has not won a title this season (written before he won in Halle, see here). Nadal has already won seven titles. Although six of those were on clay, he is a better player on the modern grass than on hard court. Djokovic will look to regain confidence after coming so close to dethroning the King of Clay just within the past week. Andy Murray skipped Roland Garros with a back injury, and has been practicing on grass for some time now. He has the title on his mind as well after last year’s runner-up performance. These fierce rivals are all years younger, sharply in their primes. Looking at Federer in 2013, we have seen concentration lapses. There have been times where his serve has faltered. The concern is there for his back as seen in Indian Wells this year. This is a critical time moving forward for the legend.