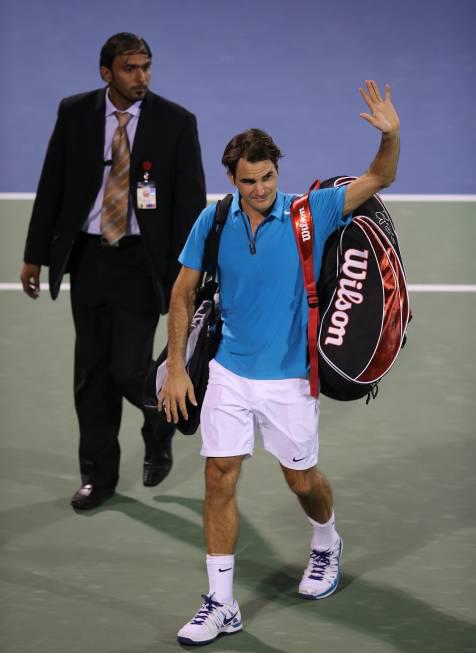 Tomas Berdych saved three match points in the second set tiebreak of a closely fought match against Roger Federer Friday night in Dubai. The Czech brought his huge power game to the match, making it difficult for the Swiss to convert at the most crucial moments. While Federer took advantage of his single break to serve out the first set, he played poorly in two service games, each costing him the break and eventually, the match. In the second set, Federer’s serve faltered greatly, falling into a love 30 deficit before Berdych broke for 4-2, on his way to evening the match.

In a set of streaks, Federer would claw back from 5-2 to even the match, before forcing a tiebreak. Soon after he immediately earned the mini-break, the Czech went on a tear, winning four points in a row. The Swiss took his turn, winning the next three points, having the match on his serve, 5-4 in the tiebreaker. First to slip would be two match points, leading to a change of ends at 6 points apiece. Berdych would save another match point, while Federer saved two set points. Serving at 8-9, Federer would be frozen as Berdych ripped a forehand return up the line, fist pumping to his chair.

The final set began on serve, but early on, again the Federer serve faltered. Quickly behind at love 30, Berdych pounced at his opportunity, breaking and continuing to maintain the gap to lead 5-3. Federer himself would be pushed in each of his service games. The Swiss managed to save two match points, but one game later, Berdych would hold at love, closing out the match after 2 hours 19 minutes. 3-6 7-6 (8) 6-4. The Czech will face Novak Djokovic in Saturday’s final at the Dubai Duty Free Tennis Championships.

Federer after the match (via ATP World Tour)

“It’s just disappointing losing this way. I think it’s the third time I lost [with] match points against Tomas, twice in singles and once in doubles,” reflected Federer. “It’s just one of those matches you feel you should have won but end up losing. When you lose with match points, you always have a lot of regrets. That’s one of these matches again tonight.”