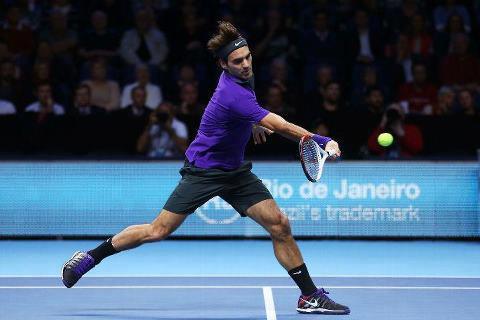 Swiss maestro Roger Federer won his 70th match (70-10 of the season) Thursday afternoon at the O2 Arena in London. As he took on David Ferrer in the round robin of the ATP World Tour Finals, a semifinal berth was near if Federer won in straight sets. That he did, but he was made to work. The Swiss fended off nine of ten break points against him, and improved to 2-0 in Group B as a result. Relentless as always, Ferrer pushed points into long, grueling rallies. Right in the opening game, the Swiss maestro had to win five straight points to overcome a love 40 deficit. He would find a crack in the Spaniard, breaking in the final game to win the first set, 6-4.

The second set had no breaks of serve however, going the distance to a tiebreak. There, Federer managed to take a 4-2 lead on the change of ends, and held on for a 6-4 7-6 (5) victory in 1 hour 49 minutes. He is the first to book his place in the semifinals of the season-ending championships (10th time in 11 appearances). He remains on course in his attempt to win his 77th career title, which would tie John McEnroe for third all time.