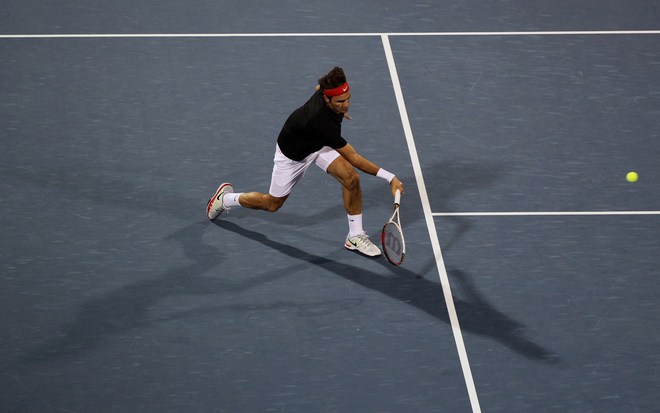 Twice in a matter of weeks, Federer took on the tall Argentine, Juan Martin Del Potro. Friday night in Dubai and in front of a sell out crowd, the two players contested a very tight match, with no breaks of serve throughout. Both players fired 11 aces. Federer has not lost serve all week and has not been taken to deuce in his last two matches. Federer pounced to a quick lead in the first set tiebreak, before Del Potro edged back. The Swiss maestro then served one point to clinch the first set, 7-6 (7-5). The second set continued the trend, but with Federer squandering three break point chances early on. This time it was Del Potro serving out in front, but in this extremely close match, Federer forced another tiebreak.

The Argentine lept ahead 5-0, and was serving with four set points at 6-2. After one missed forehand and two points won by Federer on serve, it was a reversal of roles, as Federer forced to save a fourth set point down 6-5 against the Del Potro serve. In the first set tiebreak, Del Potro was not able to do so. Federer did. He outlasted the Argentine in a long rally, being pushed side to side by blistering groundstrokes. Upon switching sides at 6 all, Federer got one shot at closing out the match, and he didn’t miss. The Swiss maestro converted his first match point, and defeated Del Potro 7-6 (5) 7-6 (6), in 1 hour 59 minutes. He will take on Andy Murray in the final, who defeated top seeded Novak Djokovic in the first semifinal, 6-2 7-5.

Federer reflected after the match and looked forward to tomorrow’s final against Andy Murray.

“It was a good comeback, especially on a quick court,” Federer said. “I didn’t believe I was going to come back, but at least sort of make him a bit nervous. Next thing I know, I had a great point at 6-all and I was able to come through. So it was a great match for me.”

“I just think Andy is an amazing player, and so far he’s proved that this year. He’s in the finals now with a great win against Novak. I expect a really difficult match in the finals.”

The 20th anniversary of the Dubai Duty Free Tennis Championships concludes tomorrow. Watch the final between Roger Federer and Andy Murray on FF07tv, not before 7pm local time in Dubai (Saturday, March 3).