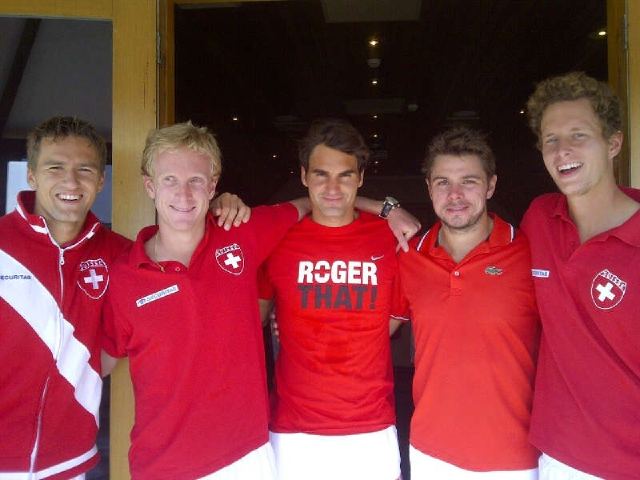 Swiss maestro Roger Federer will play his first Davis Cup first round tie this week since 2004. He will lead Switzerland against the United States when they play in Fribourg, February 10-12. As Credit Suisse reports, this makes the Swiss one of the most dangerous contenders in the competition.

Davis Cup is also a high priority this year for Federer, albeit in a schedule including a busy February (Rotterdam, Dubai), and the summer Olympics in London.

Often times Davis Cup is something not associated as much with Federer, as Switzerland has not been in serious contention for the title in recent years. The last time the Swiss were in a Davis Cup final was 20 years ago. However, since losing to Lleyton Hewitt in the 2003 semifinals, Federer has remained unbeaten, a stretch of eight years and counting.

Besides an Olympic singles gold, the Davis Cup is the only trophy still missing from Federer’s cabinet. In this competition too, however, he proved long ago that he is among the world’s exceptional players. He won 25 of his 26 last singles matches, his last defeat being at the hands of Hewitt in 2003 – an unparalleled record. He had already demonstrated his class when he played against the US in his home city of Basel in 2001 – and made it a Davis Cup triple, winning two singles and also the doubles (with Lorenzo Manta) and propelling Switzerland to a 3-2 win. “It was the first time I cried after winning a match,” he recalls. His love for the Davis Cup had been kindled.

Also important moving forward in 2012, is to put the painful loss recently in Melbourne, into the past. Immediately following being ousted, Federer’s thoughts were on Davis Cup and the match-up vs the United States.

The contest gives Federer an opportunity to forget his painful semifinal defeat to Rafael Nadal in the Australian Open. “I’m really looking forward to this encounter, all the more so given that we can play in Switzerland,” he said after his exit in Melbourne. As home team, Switzerland was able to choose the type of playing surface and opted for clay. “That was undoubtedly the right decision, even if it’s unusual to suddenly be playing on clay in February,” says Federer. “The US certainly have a team that can beat us, however. All their players are dangerous, in the singles and in the doubles.”

Davis Cup is next for Roger Federer as he will join his Swiss teammates in taking on the United States, February 10-12. FF07tv will broadcast live coverage in Fribourg, Switzerland.