Roger Federer broke in the first game of the match and never looked back as he went on to defeat Frenchman Richard Gasquet 6-2 7-5. He will go for his 5th title in Dubai, facing Novak Djokovic in the final. After the match, Federer reflected on his win (From the ATP Staff):

“I was very happy about my performance from the start,” reflected Federer. “I felt I was hitting the ball well. He’s a great talent. He’s one of the guys I really enjoy playing the most on tour. I thought tonight I played the right way. Obviously should have gone or could have gone three sets, but I was able to avoid that. Then he had a bit of a slump towards the end, which I was able to take advantage of.” 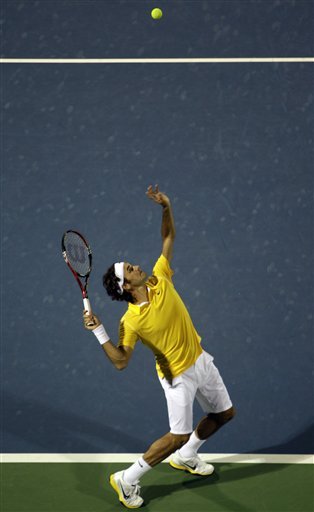 From the ATP Staff:

“I was just not able to serve, move to the sides, and just felt pain,” explained Berdych. “There was no chance to just play with this guy in the condition that I was feeling. I need to get healthy again and get to feel strong and be ready for another two very tough tournaments which are waiting for me in the States.”

“I don’t know how to explain today’s match really. In one word: catastrophe,” declared Djokovic. “I think the match overall and my game, it was the worst match this year for me, worst performance. But I managed to get a win, so I guess that’s what matters.”

Stay updated with the Dubai 2011 photo album at FedererFan07 on Facebook.

Thats it for the tennis side of things. Other FedererFan07 matters including Meebo chat and that hit count in the top right will be addressed in a post a little bit later on. Below is a small photo screenshot from my phone showing my Meebo app and you can see how many messages I got about how you would like to send your feedback when you’re on the go. So stay tuned for more soon.

Thank you for visiting.