Federer Cruises Past Youzhny in Dubai

Shaking off the rust after a month’s layoff, Roger Federer appeared slow in the first few games to find his range, but once he did, things went comfortably Monday evening at the 2015 Dubai Duty Free Tennis Championships. The Swiss maestro first faced Mikhail Youzhny in 2000, and over fifteen years, had never lost. That trend marched on to a 16-0 head-to-head record, as Federer cruised 6-3 6-1 in just 56 minutes. He fired eight aces to two double faults, winning 83% of points on his first serve, along with hitting 27 winners. 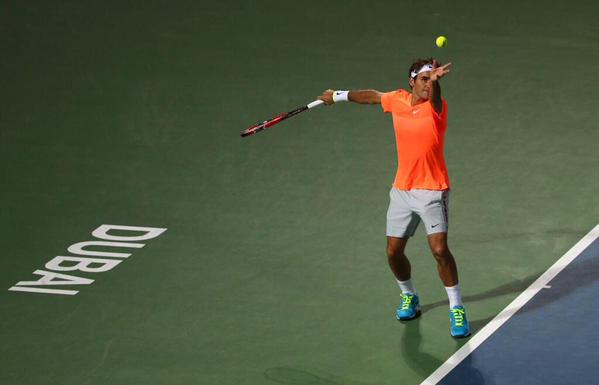 Federer was 5 of 11 at net and converted 4 of 7 break points. His second round match will be Wednesday, but first he awaits the winner of Tuesday’s match between Fernando Verdasco and Guillermo Garcia-Lopez. Pairing up with Swiss Davis Cup teammate Michael Lammer, the duo will face second seeded Juan-Julien Rojer and Horia Tecau Tuesday (not before 5pm local).

Federer Cruises Past Youzhny in Dubai