Roger Federer continued his fine form at the 2015 Brisbane International Saturday afternoon as he defeated Bulgarian Grigor Dimitrov with ease, 6-2 6-2 in 53 minutes, saving all four break points he faced in the semifinal clash. The Swiss maestro was sharp on his groundstrokes, finding the corners and constructing points efficiently. It was his net game that received a jolt a year ago upon bringing Stefan Edberg on his team, and the aggressiveness was on display. The sold out crowd at Pat Rafter Arena saw the Swiss come to net often, putting pressure on Dimitrov from the very first game. 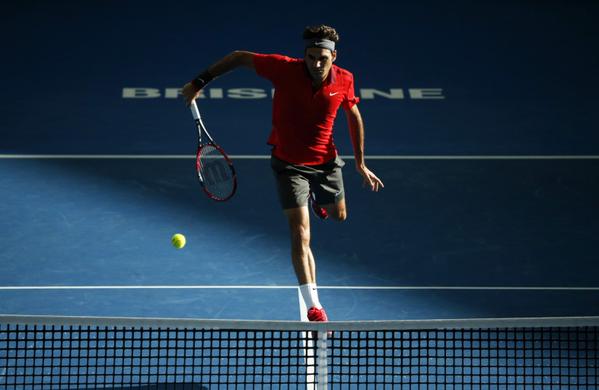 With an immediate break, Federer took off with the match, which like his 40 minute demolition of James Duckworth the night before, was never in doubt. Sharp from start to finish, the 17-time grand slam champion advanced to the final for a second year in a row in Brisbane, where he will face Milos Raonic. The Canadian defeated Kei Nishikori in a gripping match earlier, 6-7 (4) 7-6 (4) 7-6 (4). The Swiss will seek his first Brisbane International title (first appearance in 2014, finalist), and his 1000th career victory on the ATP World Tour (Sunday 7pm local/4am ET/1am PT).