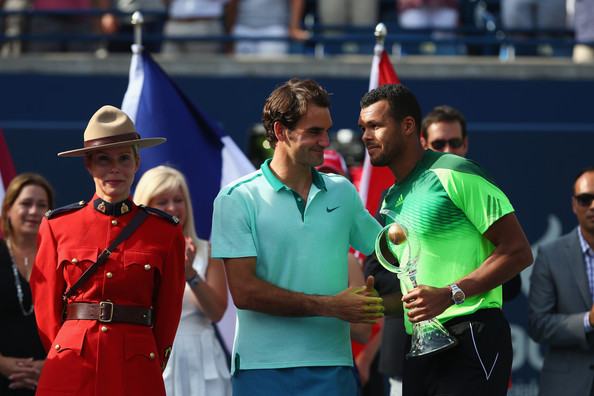 Something about being unable to hit forehands; it just wasn’t his day. More or less the words of Roger Federer after he came up short Sunday in the Toronto masters final against Jo-Wilfried Tsonga, who played the best tennis of his life this past week. The Frenchman capped his spectacular week, defeating Novak Djokovic, Andy Murray, and Grigor Dimitrov, with a 7-5 7-6 (3) win over the Swiss maestro, to capture his first Rogers Cup title and second masters 1000 title overall. It was the first time in 120 finals that Federer did not have a single break point opportunity.

Federer was extremely erratic from the baseline for most of the match, despite being sublime at the net, at times making spectacular volleys. The Frenchman broke when the Swiss fired a badly missed forehand long late in the first set. The second set was filled with struggles for Federer, with very poorly struck groundstrokes and sloppy misses. Somehow he managed to hold serve, backed by his impeccable net game, especially leveling the final at 4 all. Although he forced a tiebreak, Tsonga was too strong with the finish line in sight.