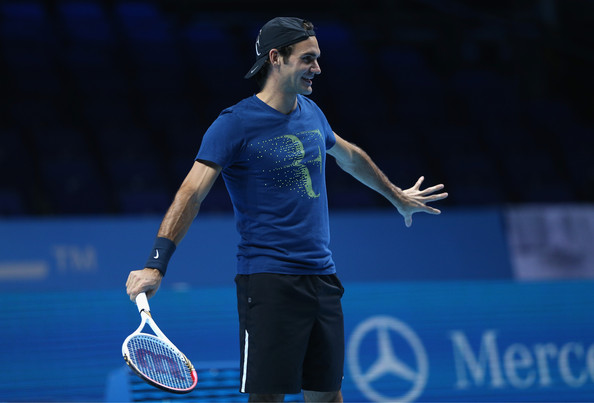 Roger Federer is in midst of his training for 2014, which is closer than it seems. The off-season in tennis is short, but the Swiss maestro will change his preparation for the upcoming season. This December, there are no exhibitions he is taking part in, no events for sponsors, and no other media obligations. However he sat down with Marco Falbo for a brief but thorough interview with Credit Suisse.

Marco Falbo: Roger Federer, you are ending 2013 ranked No. 6, after starting it ranked No. 2. How do you assess your season that has just ended?

Roger Federer: It was a very difficult year. It may have begun well with the semi-final in Australia, and it ended well. But it would be better to forget the months from March to October, despite the quarter-finals at Roland Garros and the win in Halle. My back problems began at Indian Wells in March; after the match against Ivan Dodig, I shouldn’t have kept playing, the games against Stanislas Wawrinka and Rafael Nadal were too much. After that, I fell behind with my training and was unable to catch up again because my back problems soon returned. In the summer too, it would have been better to have given up in Hamburg and Gstaad. These problems cost me a lot of time and threw me off course.

No year is lost. In the circumstances, it was actually an interesting season. It’s no joke being injured, of course. But I had to get through it, I had to question everything. Along with the back problems, I had other setbacks of a kind I had seldom had in the previous ten years. But nonetheless it was an interesting experience – to see how different people reacted, and how I dealt with this situation myself. Sometimes, I could hardly move properly, and yet was sharply criticized by some people.

After always reaching at least the semi-finals at 36 Grand Slam tournaments in a row, you lost in the second round at Wimbledon to Sergiy Stakhovsky. Was that the low point of your year?

Of course, that defeat was one of the biggest disappointments of my season. I went to Wimbledon convinced that I could win the tournament for the eighth time. But it wasn’t a complete surprise for me. Because I hadn’t played really well in Paris. Then Wimbledon was the start of the bigger problems.

Haven’t these unaccustomed defeats against low-ranked players taken away your enjoyment of tennis?

Defeats are part of tennis. What matters is how you react. What is also important for me is that I am honest with myself. I am the sort of person who often questions everything; I did the same when things were going really well for me. That’s why I am not affected much by the criticism, which I don’t think is justified.

Where do you see yourself in terms of your performance? Have you come up against certain limitations, or do you think that you are still capable of top performances?

I can see no reason why I shouldn’t play better again in 2014, and have some great wins. I have still got some major goals, because I certainly haven’t forgotten how to play tennis; after all, I was still number one in the fall of 2012, and at the end of the season, once my back was better, my results also improved. I reached the final in Basel and the semi-finals at Paris-Bercy and the World Tour Finals, and beat top-ten players without playing my best tennis. If my serve or my forehand had been a bit more solid, the results could have been much better.

You achieved some of your best wins at the indoor tournaments. You contested 13 matches in three weeks, and beat top players such as Juan Martin Del Potro twice, Richard Gasquet, and Grigor Dimitrov. Were you surprised?

The end result is good, even though I would have liked to win a tournament. But that would perhaps have been asking too much, after such a year. After all, I was able to concentrate again fully on my tennis and on tactics for three weeks, and my body didn’t give me any problems. In the preceding months, that had been different. That is a big step, and makes me want more. My self-confidence has also returned. By the end, everyone around me was talking positively again, the mood was much better than in the summer. That boosts my morale for the coming year, and it’s a big relief. The fun has definitely returned.

What are your specific goals for 2014?

I would like to win about five tournaments again and play in great finals, that’s where I have most fun. My ranking is less important to me, unless it’s about being number one. But it would be good to be in the top four or top eight, to get good seedings.

Are there any changes in your planning in 2014?

Yes, they’re already being prepared. I’m concentrating fully on my training; for once I won’t be participating in any show tournaments, in contrast with 2012 when I went to South America. What is important is that I can train hard in Dubai in December without any setbacks. I think that it will take until April for me to catch up completely with my training. For once, I’ll be opening the new season at the ATP tournament in Brisbane, after which it’s the Australian Open.

Will you be testing rackets with bigger heads, as you did in the summer when you even contested two tournaments with one?

I will, for sure. Because this summer’s tests don’t tell us much because I wasn’t able to play properly in Hamburg and Gstaad because of my back problems.

Stanislas Wawrinka has become a top ten player. Might that mean that you would be more willing to appear in the Davis Cup again? In particular, will you be there against Serbia in the first round in February 2014?

The situation is the same as two years ago. I’ve long known that Wawrinka could beat the best players, he hasn’t had to prove anything to me for a long time. In the next few weeks I will make a decision about the Davis Cup. But at the moment I have no idea what it will be. But I am happy for Stan that things are going so well for him. It was a fantastic end of season, with two Swiss players in the semi-finals of the World Tour Finals. And neither of us knew right up to the final tournament at Paris-Bercy whether we would even qualify.

Novak Djokovic said in London that you were still very strong but that you had become a bit slower and didn’t move as well as in the past. What’s your response to that?

What he says is true. But it would also be strange if I could move wonderfully and at my best after a year when I couldn’t train enough and in between times lost quite a bit of my self-confidence. I don’t feel that I am as fast as in my best years, either. But despite that I can still compete with the best. That makes me feel positive. For months, I played while being afraid of back pains and got into bad habits in the process. On court, I was orientating myself to the back rather than to the front, I lost my usual aggressiveness. And somehow I became a different player. Now I need time to get all of that out of my system again.

Why did you split from your American coach Paul Annacone after more than three years? And what do you expect from a new coach?

It was a mutual split. We talked to each other in Dubai before the tournament in Shanghai and both of us had the feeling that it was the right moment. The split went as well as it possibly could. Paul will remain a good friend and we’re still in close contact with each other. In Severin Lüthi, I still have a coach who has been extremely helpful for me for a long time. But I don’t know if he can or wants to be on the road with me for 40 weeks next year. At the moment, I don’t know if I am going to appoint a new coach at all. I’m very happy with my team.

How do you assess the situation at the top, with Rafael Nadal and Novak Djokovic as numbers one and two?

The two players’ achievements this year have been massive, and they are clearly better than the others. I think Nadal is the right number one, because he won two Grand Slam titles. I’m looking forward to seeing how the two of them start next season, they are quite clearly the ones to beat.