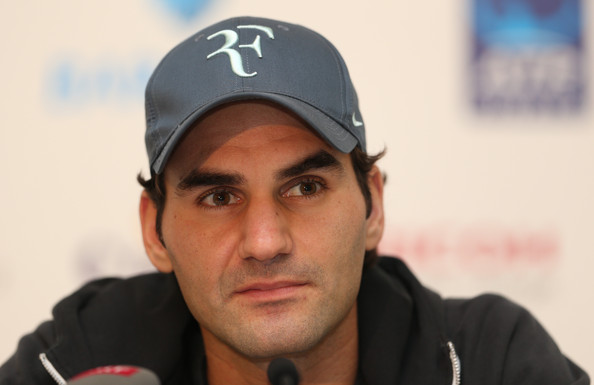 Roger Federer’s smile touched his eyes when cricket star Sachin Tendulkar’s name was invoked. “Hey! I’m a cricketer too,” he said, shrugging his shoulders, before adding, “at heart.”

Federer’s father Robert is Swiss, but his mother Lynette is South African, where the Swiss maestro’s love for cricket comes from. The two legends met at Wimbledon in 2011.

Sachin Tendulkar will bid adieu to cricket in Mumbai in a fortnight, playing his 200th Test match. In an exclusive chat with The Times of India, Federer said, “it is always sad when the curtains come down on a great career. I’m really happy for him that he can go out on his terms, at the time he has chosen, at a venue of his choice. That’s really great. I hope his farewell game is everything he wants it to be. He deserves it.”

“I wish him a great life after cricket,” Federer said, “Hope it is as exciting and memorable as his cricket.”

The 32-year-old, winner of 17 Grand Slam titles, said he watched Tendulkar bat on a number of occasions. “I’ve seen him play, not as much as I would’ve liked, but I’ve watched him on television several times,” he said.

Federer said he remembered his conversation with Tendulkar. “I’m glad I got to meet him, we had tea in the terrace at Wimbledon. I remember the meeting clearly,” Federer said. “I enjoy meeting great athletes. It is an experience for me. I like picking their brains, seeing how it works. I enjoyed my time with Sachin.”