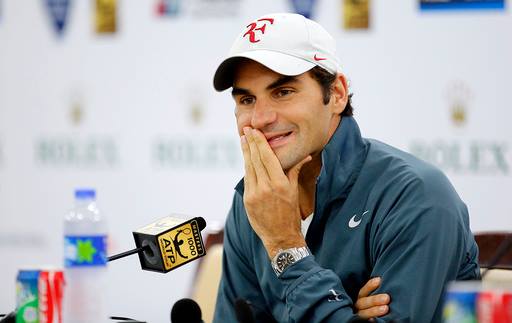 After defeating Andreas Seppi in his opening match at the Shanghai Rolex masters, Roger Federer addressed the media during his press conference. One of the questions arose surrounding Viktor Troicki’s doping ban. The Court of Arbitration for Sport is set to hear the Serbian’s appeal of his 18-month suspension for failing to provide a requested blood sample. Novak Djokovic recently said he signed a petition demanding reform of the doping rules to provide more clarity for players. When the Swiss maestro was asked about his thoughts, he took to the direct response, which has remained unchanged.

Roger Federer’s stance on anti-doping protocols is a simple one: Do whatever it takes to catch and discourage cheaters. He has little sympathy for players skipping tests.

“I want it as tough as possible, as many tests as possible,” he said Wednesday after beating Andreas Seppi in his opening match at the Shanghai Masters. “You’re not allowed to skip tests. I don’t care what the circumstances are, except if they’re super extreme, like you’re in the hospital already. But I just think when you get tested, you show up, you do it, you move on. It doesn’t matter what time of the day or where it is.”

Federer was unaware of Djokovic’s specific calls for change.

“I just know it needs to be extremely tough and the punishments need to be severe,” Federer said, “because you want the athletes not to think about, ‘Is it worth it because I’ll get away with it and the punishment will not be so big.’ So I’m just all for anything it takes to catch the bad people.”

“I think that if the person who is there doing the control said, ‘Yes, Viktor, you can to do it tomorrow,’ he did it the next day and everything was fine, I don’t see a case here,” Nadal said after beating Alexandr Dolgopolov in his first match in Shanghai.

Much like Djokovic, Nadal did not understand the alleged lack of clarity from the doping control officer.

“If Viktor said, ‘I don’t want to do it today,’ the [doping control officer] had to say, ‘OK, if you don’t do it today, you will be penalized and you will not do it tomorrow,’” Nadal said.

Djokovic’s concern centers on the lack of recourse for players when they believe the officer has misrepresented what happened. He went so far as to say that the doping control officer was “lying a lot” when she told the ITF’s independent tribunal that she never told an ill Troicki he was allowed to skip a requested blood test at the Monte Carlo Masters in April. Troicki, a 27-year-old from Serbia, gave a blood test the next day and the results came back clean.

Source: Sports Illustrated, Beyond the Baseline