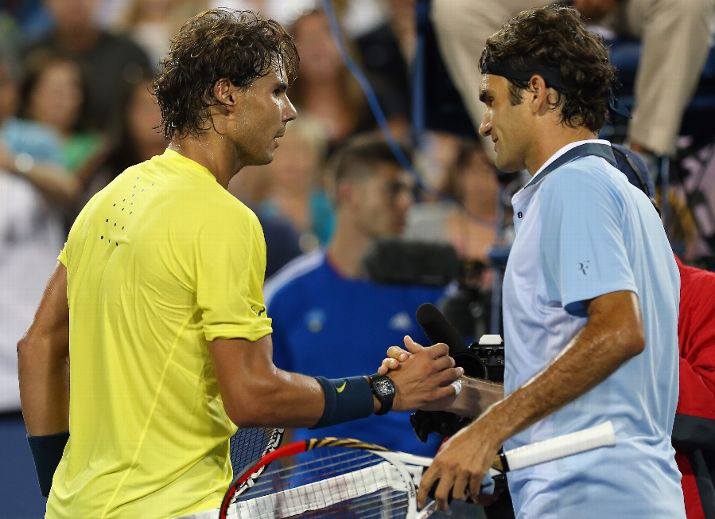 Rafael Nadal outlasted Roger Federer in a closely contested match where both players displayed some of their finest form. Both players were sharp most of the match, but the Swiss maestro had to fend off a couple break points early before settling into a rhythm of quick service holds. For his own part, Nadal also served well, something not quite the norm for his game, predominantly strong on extending rallies. Federer struck first, breaking in the final game of the first set with a zipping backhand cross court off the Spaniard’s heavy forehand. He would have to continue to fight early on in the second set, as Nadal applied pressure early and often. This time, he would break the Swiss’ serve in the final game, evening the match and taking it to the distance.

The lead began to stretch although it remained only one break, and Federer nearly broke back with Nadal serving for the match. The 5-time Cincinnati champion saved four match points but did not challenge the fifth, which was shown on television replays to be out. Nadal prevailed 5-7 6-4 6-3 in 2 hours 14 minutes. It was arguably one of the best matches of their rivalry, especially in recent years. Also, it was a match where Federer was sharp and competitive throughout, let alone one service game. Despite defeat, signs are positive for the 17 time grand slam champion, who has won only one title in 2013.

Federer after the match: “I’m not totally unhappy about the match. I could have played a bit better, but I think I was playing well and tactics were working. Of course, I always have to adjust to faster courts, slower courts when I play Rafa. Plus it is him; it’s the type of game I don’t see very often…”

“I’m happy with my progress along the way. Could have won tonight. Should have won tonight, who knows? But at the end, I think Rafa’s confidence and the way he’s playing at the moment got him through. So for me, I think it was a good step in the right direction. My mind’s already totally geared into what I’m going to do tomorrow, next day, and the following day, and looking ahead at the US Open. So I’m excited about the next sort of 10 days.”

Roger Federer will next turn his attention to preparation for the US Open, which begins August 26. See his Nike outfit for day and night sessions here.