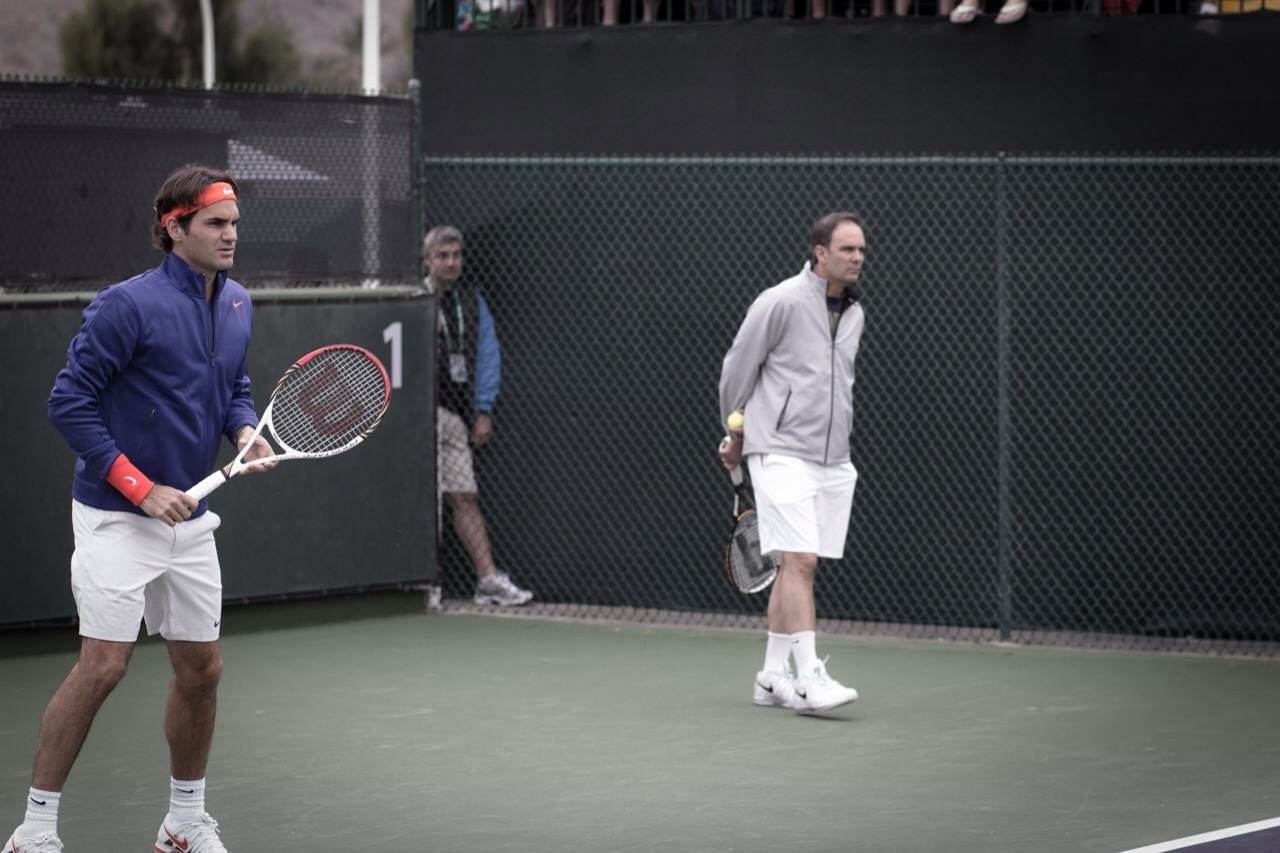 Paul Annacone is currently the coach of Roger Federer (since August 2010). Prior to that he coached 14 time grand slam champion Pete Sampras (1995-2002), and Tim Henman (2003-2007). Annacone was a player himself, with a chip and charge style of play, something rarely seen today. He reached a career high ranking of #12 in singles, winning three titles and the Australian Open doubles title in 1985 with long time partner Christo van Rensburg.

During the 2013 BNP Paribas Open in Indian Wells, he was kind to give his time for an interview with FedererFan07.com, the #1 Federer site.

What is it like coaching and being involved day to day with Roger and his team?

A terrific experience, all the people involved are class acts, with the same agenda. Everyone is on the same page, all doing their part to assist Roger. Terrific professionals, but even better people, which is what makes it a great team working environment.

After coaching Pete Sampras, you took on duties with Tim Henman. 2004 was one of his best seasons, making the semifinals of Roland Garros and the US Open. At the Open, he faced a young Roger Federer. What was it like during pre-match routine and strategy?

As always, you go through your tactics, and how best to put in place a plan to have you play your best tennis. This is always the routine no matter who you play.

At the time, Roger won 3 grand slams, and was going for 3 in a season, not done since Wilander in 1988. What were your thoughts about Roger back then?

I always felt Roger was a phenomenal talent, and as he matured he truly embraced the responsibilities of being a great player. This is on and off the court, he really epitomizes all you want in a superstar. You never know how and if someone will sustain that level but looking at Roger’s record, it speaks for itself.

At anytime in the middle years after Henman retired, did you ever see yourself teaming up with Roger or any other particular player?

Not really, no. It is always intriguing to think about how you would try to assist someone, particularly someone who has accomplished so much and has the highest of expectations, but I did not spend a lot of time speculating. That being said, I feel very fortunate to have been involved with not only Roger, but Pete & Tim as well.

Throughout the season, there are some tournaments to which you don’t travel. How is that decided?

I am very lucky to have Severin Luthi coaching Roger with me. We work very well together and due to the fact we communicate so well, I feel totally in the loop when I am not on site, as does Severin. We look at the calendar and try to make sure we both get some breaks from the travel and that it suits Roger’s needs as well. As a Team we discuss the schedule and then plug in who goes where.

You coached Pete Sampras for the second half of his career. How did the game change in those years from his mid-career to retirement?

Not too much, it was right when Pete stopped in 2002, things started to change. Slower courts, heavier balls , different strings– that happened more as Pete was stopping.

Comparing your experience with Pete to Roger, are there any notable changes in the game today from when you joined the team in 2010?

Last few years has been more of the same, it is mostly a homogenized Tour– most surfaces even if they are different are similar speeds- so the game is mostly played the same way– from the back of the court. The guys are better athletes, and stronger and more difficult to hit through— just like all other sports- bigger better stronger athletes– and it is getting tougher and tougher.

Describe Roger’s defensive skills as an all court player as opposed to some of the other top guys who prefer to play the baseline grinding game.

He uses the slice backhand very well to stay in the point and is able to transition from defense to offense very quickly. His court sense is spectacular and allows him to do many things that others cannot– the two hander players can defend a little more offensively- which is different from the one handed slice on the defense.

In practices such as here, there isn’t time for training done in the off season. What are some things you try to work on when you talk during practice?

It all depends on the day and what the focus is. This changes periodically, and there is no set in stone process, it evolves.

How long do you feel Roger can stay at the top of the game?

I think physically he has a few more years. I think mostly it will be driven by his frame of mind, his desire and what he wants to achieve. This is a normal process for any athlete- but he has an amazing youthful exuberance and still is driven to be the best he can be– so I think there are a number of years left.

How do you think tennis will be in five years? Playing styles, regimens, racquet and string technology.

Who knows? I hope that more fast court tennis emerges– it is always fun to see a contrast in styles and in todays game we do not see that diversity in style hardly ever– it mostly is, who is better from the back of the court– it’s great play, but very similar from most players.