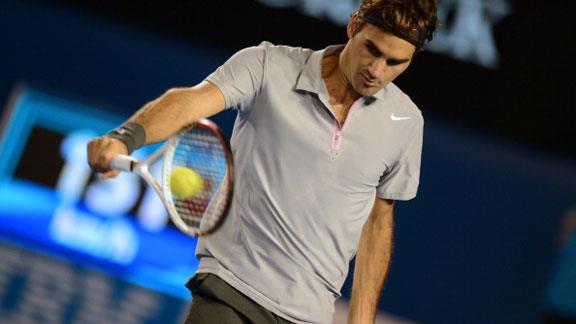 Roger Federer had to be sharp against his fourth round opponent Monday night and was immaculately so. Each of his previous three meetings with Milos Raonic had been very close, going three sets at Indian Wells, Madrid, and Halle in 2012. This was the first encounter in a grand slam, but it didn’t stop the young Canadian from firing serves routinely over 140mph (225kph). The Swiss maestro was just as tidy in taking care of his serve as he marched on, making his 35th consecutive grand slam quarterfinal (semifinals or better at Australian Open since 2004).

Raonic saved three break chances early on, but Federer’s uncanny ability to return the big serves created one more chance at 5-4, and it was enough to seal the set. At that point, the Swiss only lost two points on his serve, one for each first and second serve.

Federer was sharp all around, including being successful on challenges. Love holds were routine. To his credit, Raonic was playing to his strengths, exception to a lousy attempt at hitting a tweener. Both players were playing at quick pace, something out of uniform to the tour today.

As the match headed into a tiebreak, Federer found a way to put more returns into play, drawing Raonic to net twice; once hitting a backhand pass, the other firing a forehand winner and letting out a yell to win the set. From there, the Swiss broke twice early in the third set and closed out the match in 1 hour 53 minutes, 6-4 7-6 (4) 6-2. He will face Jo-Wilfried Tsonga in the quarterfinals.

Federer: “I thought I had a good night. Was focused on what I wanted to do and was able to come through.”

“First focus on my own serve before trying to return Milos’. As the match went on I started to feel better. That’s normal.”

“What I like about Milos is he seems v (very).committed. Has team set up. Travels every week with the same guys.” “Feel like he’s focused on matches & practice. Rest is taken care of. Seems like he’s in a good place where he can focus……whereas think Tomic still needs some time to figure out his team.”

(On Raonic and Tomic) “Totally different characters, seems like, but both big and strong with great potential.”

All video below from official Australian Open YouTube channel.

Shot of the Day

The Second Week Of A Slam