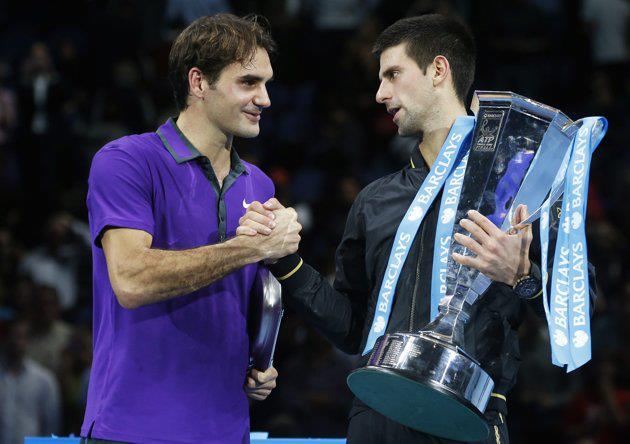 Roger Federer jumped out to an early lead, a sprinting start, only to succumb in a tiebreaker. He would play up a break for most of the second set, only to be broken after having two set points, subsequently losing the set and the match to Novak Djokovic, 7-6 (6) 7-5. A close match, yet one which the Swiss maestro uncharacteristically was broken twice in each set, slipped away into the Serbian’s hands. A 7th title at the season-ending championships will have to wait until 2013. Djokovic clawed his way back into the match by breaking the Swiss and holding serve to 3 all. He then edged out by engaging in longer rallies, which favored his defending and retrieving abilities.

The 2008 champion of the then called Tennis Masters Cup in Shanghai, won his first title in London at the O2 Arena, capping a second year as world #1. For the Swiss maestro, it was a disappointing day, as was shown in the tone of his voice during the trophy ceremony.

Federer after the match – “Maybe a bit of regret because I had the lead twice first before him.” “At the end of the day, that doesn’t matter. You have to get over the finish line in the set and then obviously at the match. He was better at that today.”

The 2012 season nonetheless marked a good year for the Swiss star, as he won his 17th grand slam at Wimbledon, reclaimed world #1 for several weeks, breaking Pete Sampras’ previous record (286 weeks), and setting his own record of 302 weeks at the top spot in tennis. Further, Federer won 6 titles (Rotterdam, Dubai, Indian Wells, Madrid, Wimbledon, Cincinnati), three of which, masters 1000 titles.

Next for Federer is a bit of time off before taking part in exhibition matches in South America next month.