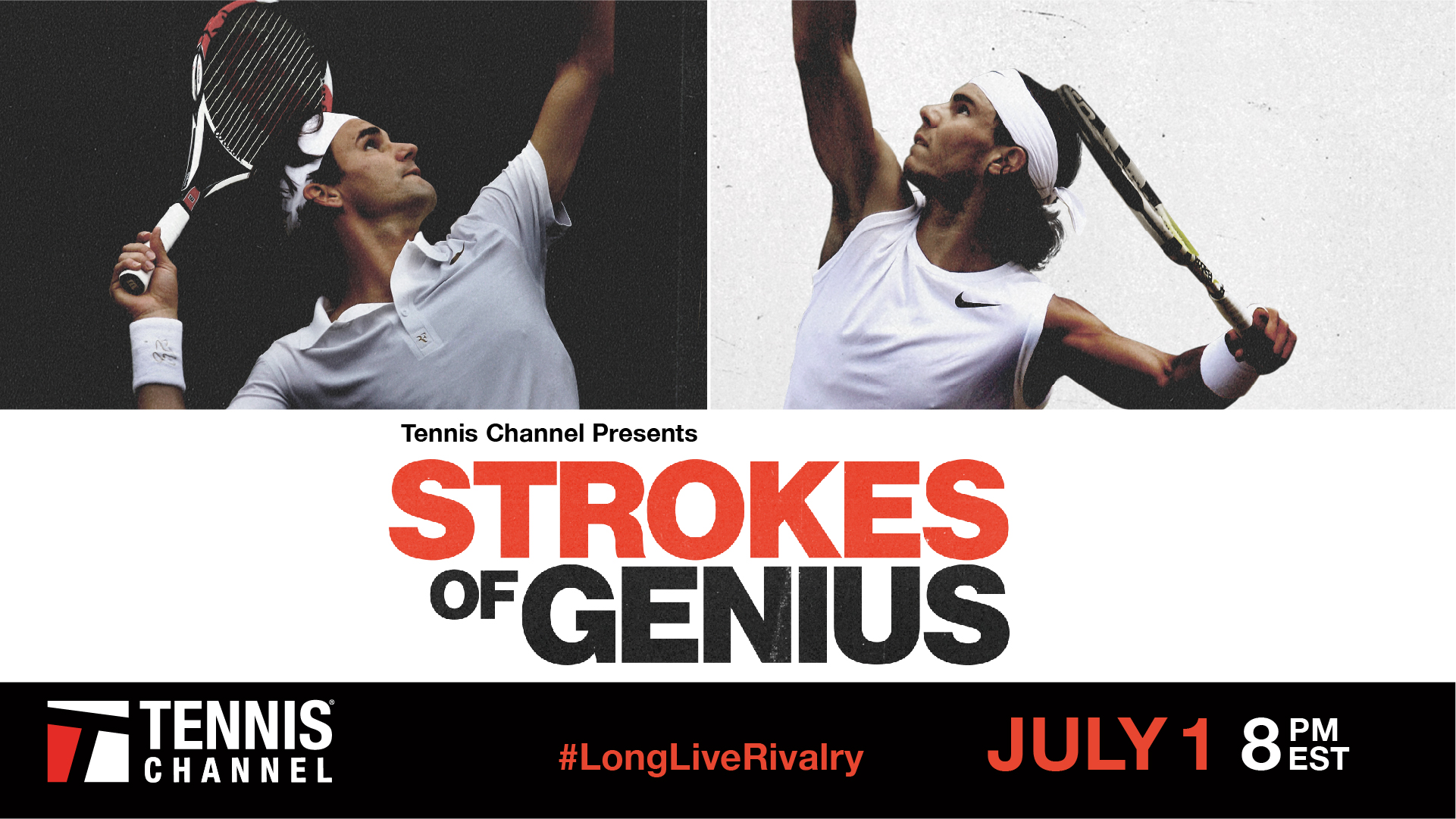 Strokes of Genius Tennis Channel Documentary Honors Legendary 2008 Federer-Nadal Wimbledon Final – Tennis Channel’s first full-length feature film will debut on the network Sunday, July 1, at 8 p.m. ET, on the eve of its two-week Wimbledon coverage. The documentary, Strokes of Genius, fittingly looks at the ongoing rivalry of icons Roger Federer and Rafael Nadal through the prism of their epic 2008 championship at the All England Lawn Tennis Club, thought by many to be the greatest match of all time. Ten years later, the future Hall of Famers are still among the best athletes in the world and engaged in a tug of war at the pinnacle of the game, establishing themselves as the most decorated major singles champions in men’s tennis history. Adding another chapter to one of the greatest rivalries of all time, heading into Wimbledon they stand deadlocked, alternately winning the sport’s past six major singles titles and exchanging the coveted World No. 1 and No. 2 rankings. A decade after the film’s historic 2008 final, history repeats itself as they approach the tournament with so much at stake and fan anticipation higher than it has been in years.

The film is based on the book Strokes of Genius: Federer, Nadal, and the Greatest Match Ever Played by author Jon Wertheim (@jon_wertheim), who is executive editor and senior writer for Sports Illustrated and appears on CBS “60 Minutes” and Tennis Channel throughout the year. The two-hour feature highlights the polar-opposite approaches of two competitors who seem predestined to counterbalance each other in the tennis arena. Federer’s regal calm and Nadal’s swashbuckling intensity are brought to light through match footage and new, revelatory conversations with both players, as well as Hall of Famers John McEnroe, Martina Navratilova, Chris Evert, Bjorn Borg and Pete Sampras – each of whom also won Wimbledon multiple times and found success at tennis’ other most important events. Additional interviewees include Federer’s parents Robert and Lynette, Nadal’s uncle Toni and sister Maria Isabel, match chair umpire Pascal Maria, and various coaches, sportscasters, reporters and tennis officials. 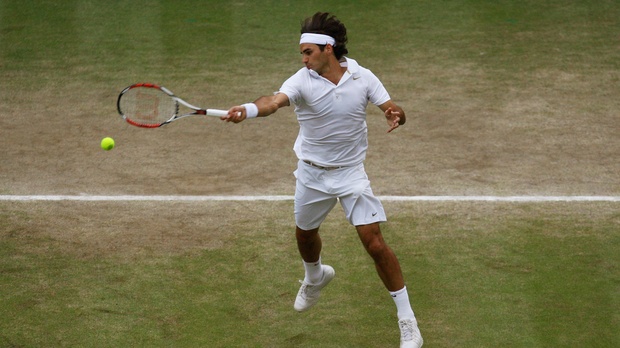 Tennis Channel is rolling Strokes of Genius out to the public through multiple platforms: cable, broadcast network primetime, national syndication and streaming sale. In addition to its run on its home television network, the film will air on The CW Network Tuesday, July 3, at 8 p.m. ET. It will also run on more than 100 stations around the United States during Wimbledon, reaching more than 70 percent of the country. Strokes of Genius will be available on Apple iTunes as well, to both U.S. and international audiences. Tennis Channel is also partnering with broadcast and subscription networks in overseas markets.

“It’s been both a labor of love and privilege to bring this unprecedented story to life in Tennis Channel’s first feature film,” said Ken Solomon, president, Tennis Channel. “We couldn’t have had better production partners than Amblin Television, Rock Paper Scissors, the All England Club, Jon Wertheim, and Roger’s and Rafa’s teams. At the same time, releasing the film on four separate platforms to reach different audiences worldwide speaks to Tennis Channel’s goal of finding innovative ways to add to our audience and expand the reach and appeal of this great sport. This is also a chance to harness the global awareness of this once-in-a-lifetime moment as, amazingly, these two enter Wimbledon with so much hanging in the balance, just like 10 years ago.”

In the twilight of July 6, 2008, the Wimbledon men’s singles championship was still undecided after four-and-a-half hours and would ultimately last close to five – determined by extra games in the fifth set, the sport’s answer to Super Bowl overtime. Everything was at stake: for Federer, the chance to win a rarified sixth-consecutive Wimbledon crown; for Nadal, already the sport’s dominant champion on clay, the chance to win his first grass-court major at tennis’ most hallowed ground while becoming the first in almost 30 years to win the French Open and Wimbledon back to back. Coming into the match, they had combined to win 14 of the previous 16 major singles titles. This was not David vs. Goliath but a clash of two heavyweights, the undisputed masters of the sport, then and now. When the contest finally ended, people around the world realized that they had just witnessed a match for the ages and the setting of a tone that would reverberate throughout tennis for the next decade.

Unlike anything Tennis Channel has ever created, Strokes of Genius uses an original classical- music score by Jeremy Turner, footage of steadily building set-and-match turning points and the razor-wire tension of two tiebreakers with the title on the line to capture the poetry and drama of tennis on its greatest stage. Along with home videos and scenes of each player in his youth, at juniors competitions and just beginning his professional career, the story uses this insular match to reveal a long-running rivalry that may be the greatest in sports history.

This year’s Wimbledon comes on the 150th anniversary of the All England Lawn Tennis Club and the 50th anniversary of the dawn of tennis’ modern Open Era. Following its July 1 premiere at 8 p.m. ET, Strokes of Genius will run again that evening at 11 p.m. ET. The following Sunday, July 8, the film will also air at 8 p.m. ET and 11 p.m. ET. On Sunday, July 15, Tennis Channel will show Strokes of Genius at 9 p.m. ET.

Immediately following the first three showings of Strokes of Genius, Tennis Channel will air What Makes Genius: the Federer/Nadal Rivalry. The hour-long special will feature Wertheim with network announcer Ted Robinson (@tedjrobinson) and former player Tim Henman (@TimHenmanNet), who served as a BBC analyst during the classic final. After debuting Sunday, July 1, at 10 p.m. ET, it will run again Monday, July 2, at 1 a.m. ET and Sunday, July 8, at 10 p.m. ET. On Sunday, July 1, at 1 p.m. ET, Tennis Channel will show the complete, unedited BBC broadcast of the 2008 Wimbledon men’s singles final as part of a daylong marathon of programming devoted to the match.

Tennis Channel (www.tennischannel.com), which is owned by Sinclair Broadcast Group, is the only 24-hour, television-based multimedia destination dedicated to both the professional sport and tennis lifestyle. A hybrid of comprehensive sports, health, fitness, pop culture, entertainment, lifestyle and travel programming, the network is home to every aspect of the wide-ranging, worldwide tennis community. It also has the most concentrated single-sport coverage in television, with telecast rights at the US Open, Wimbledon, Roland Garros (French Open), Australian Open, ATP World Tour events, WTA competitions, Davis Cup, Fed Cup and Hopman Cup. Tennis Channel is carried by nine of the top 10 video providers.