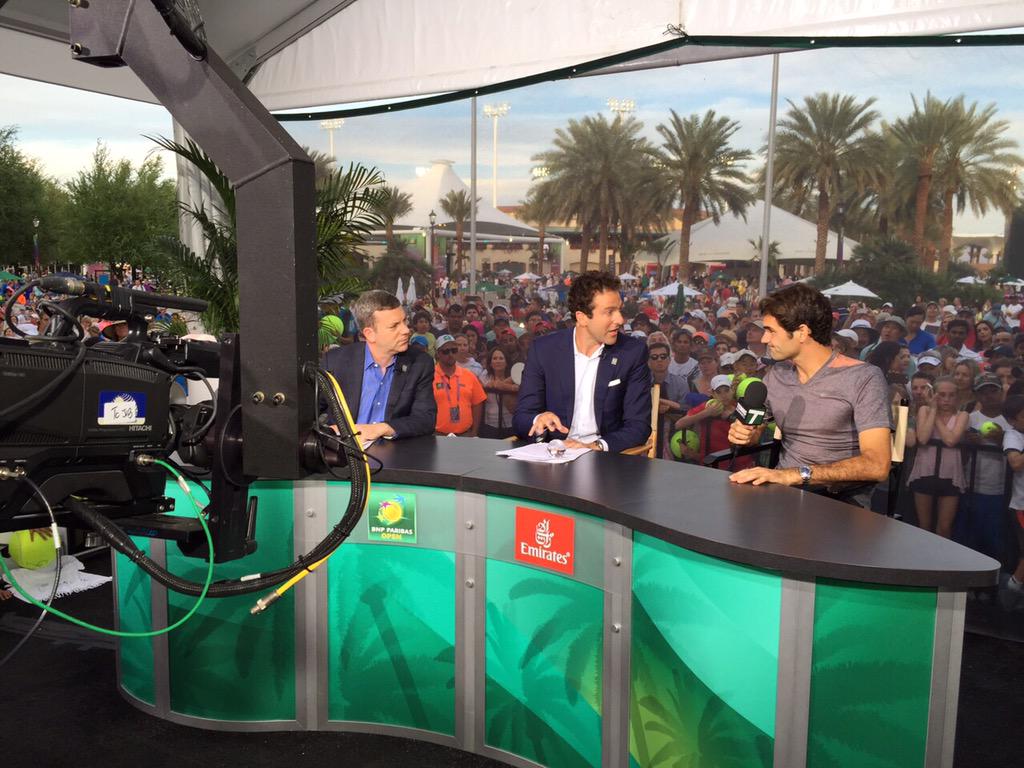 Jon Wertheim, Executive Editor and Senior Writer at Sports Illustrated, is one of the most accomplished sports journalists in America. He is the author of seven highly praised books and his work has been cited in professional sports on numerous occasions. With established authority in a variety of sports topics, Wertheim is now a regular on Tennis Channel. At the 2015 BNP Paribas Open, Wertheim took time for a brief interview for FedFan at the Tennis Channel set.

Let’s start with the BNP Paribas Open here in Indian Wells. Who are your three favorites to win? (Both men’s and women’s)

Oh man, umm, I would say, Novak’s got to be your favorite on the mens’ side, with Roger and Nishikori after that. Boy, I don’t know, Serena and Maria, and total wildcard. Last year we had, Flavia, was she, about the 20th seed? I’ll say Madison Keys, totally off the board. 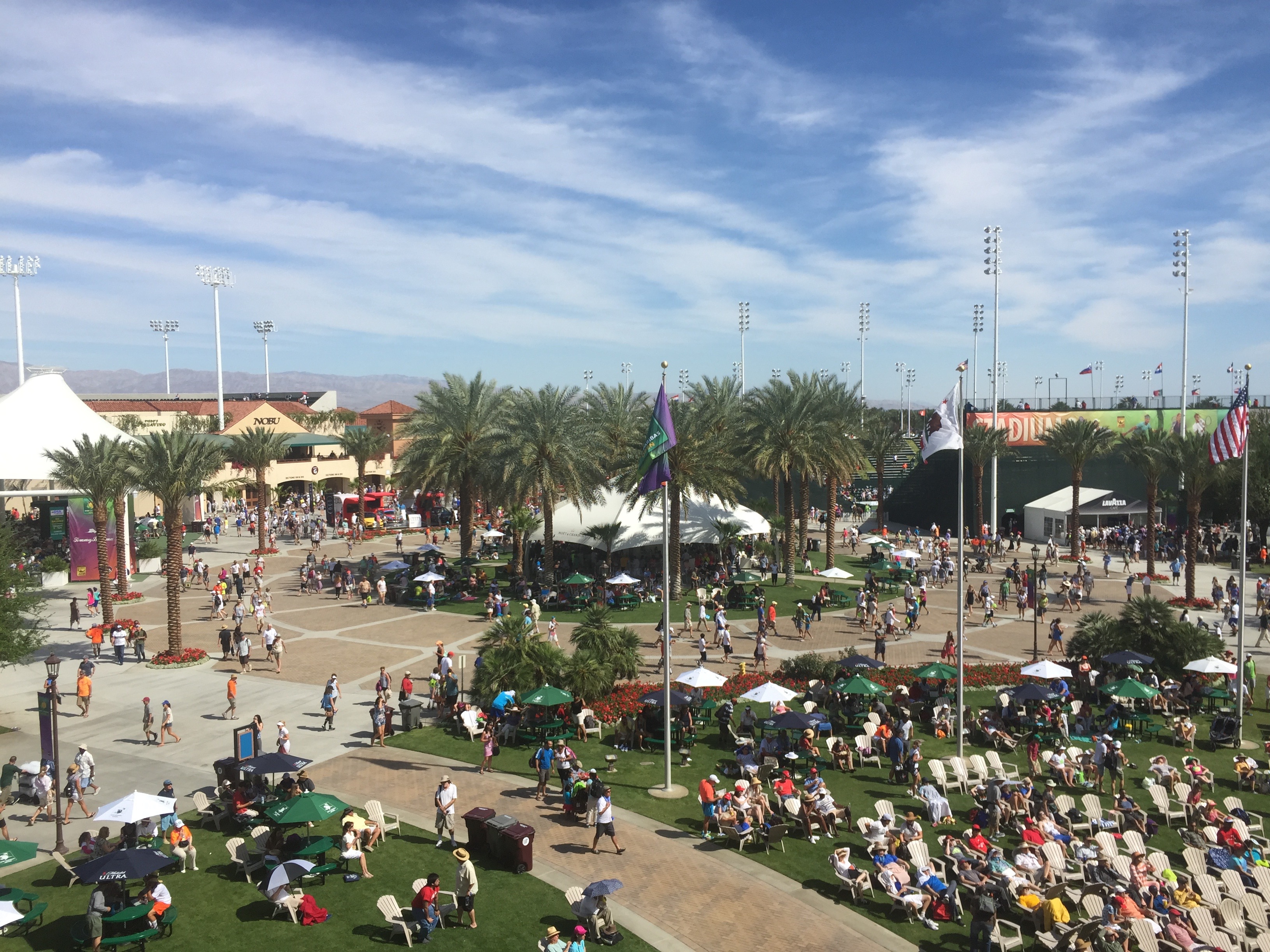 Last year (I believe in one of your mailbag pieces), you put out the idea of the U.S. Open being held here in Indian Wells once every five years. Do you think this could be a realistic idea and when could it come up in serious discussions at the USTA level?

(Laughs). Yeah, I mean, I put it out there, there’s all sorts of broadcast riddles, and, I don’t know,…are you from here?

Okay, well I don’t know what the weather is here (Indian Wells) Labor Day weekend, but if you look at the facilities, you look at the infrastructure, you know, the, how important it would be to have a big event on the west coast, the demographics,…I don’t think it’s crazy. I mean, you know, the USTA is building, they’re putting half a billion dollars into the stadiums right now. They’re not going to want to move this away every four years, but I could think of worse ideas than rotating the venue and location.

Yes, that with the 1980 Wimbledon final.

I think, it’s got to be a match of substance, so you could have a terrific third round match. I would say, the 2012 Aussie Open final would be up there, the Roger Roddick Wimbledon final (2009), boy I mean, any of the Roger Novak matches at the Open…as #5 I might put up 2013 Wimbledon, just because of the occasion. Murray beating Novak wasn’t the same match quality as some of the others, but the story, the significance. Were we talking men only?

Everyone, men and women.

Oh…umm, Venus Lindsay Wimbledon final (2005), the Henin – Capriati at the US Open definitely.

On your Mail Bag, you’ve often commented on incoming letters about drug testing in tennis. I’m curious about the biological passport. Do you think journalists or tennis fans could be more vocal about this to the ATP and WTA for pushing a quicker timetable?

Yeah, I mean the more I go down this rabbit hole, the more you realize it’s funding as much as anything else. It’s really sort of an ITF thing more than a tour issue, but, I mean speed is obviously important, I think biological passport is important. I think it’s important for appearance sake, I think it’s important practically, but it ultimately comes down to, you know, less about how often players are willing to be tested, more about what kind of investment is the tennis infrastructure willing to make in anti-doping. 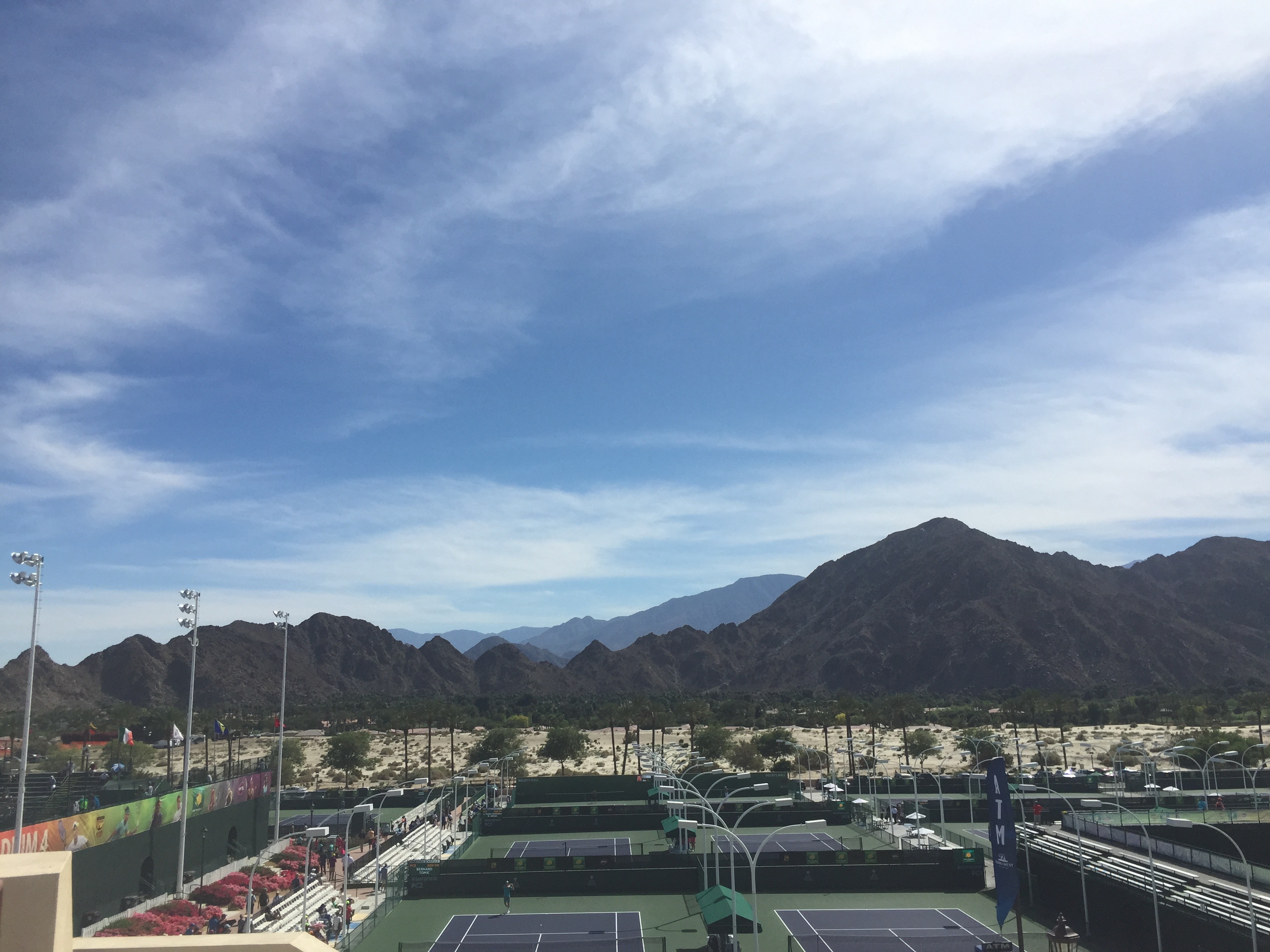 What do you think about the “smart” rackets coming out from various companies and how might we see players adopting them?

Yeah, I mean at some point the sport needs to have a serious discussion about technology. Whether it’s smart rackets, polyester string, umm, until it remains vague, there’s no reason not to experiment. I think more, the real technology advances are going to come with data and with biometrics, more than a device on your racket that tells you that you’re spinning in your serves at X mph. There’s a lot of data out there that I don’t think a whole lot of players access as much as they could or should.

Do you think the ATP or WTA would ever share such statistical information coming from smart rackets or technology (such as hawk-eye) used in tennis today?

I mean, you know, it’s the same in all sports, where the data is proprietary. If you have the time to mine it, you have the time and expertise, there’s a lot you can pick. I mean you’re not going to know player X’s testosterone level or some of the biodata, but yeah, I mean, I think all sports are dealing with this. If you have the inclination and the coding, you can have the same NBA heat maps as the Houston Rockets have. It’s just a question of, is there someone out there willing to devote the resources.

It’s still the early part of the season, so how do you think Roger Federer fares in 2015, and how long do you think he can play for at the top of the game?

Yeah, I mean at this point, the body, the body is the most important. I think scheduling is part of it, I think staying healthy, but from a strict tennis standpoint, the guy is #2 in the world right now and not that far from #1, and you know, we always say a lot has to go right at this stage for him to win another major. But you can, a lot is in your control, a lot can go right. I think, my guess is, you can ask him this, my guess is he might have scheduled the end of last year a little differently, but I think he needs, probably more rest than he used to take. If you look at how he spent the last few weeks of 2013, compared to 2014, you know, will he play all the clay events leading up to the French Open that he’s down to play, we’ll see. But the guy’s #2 and beat Djokovic, beat the #1 guy last time they played, so it’s not hard to think he’s too far off.