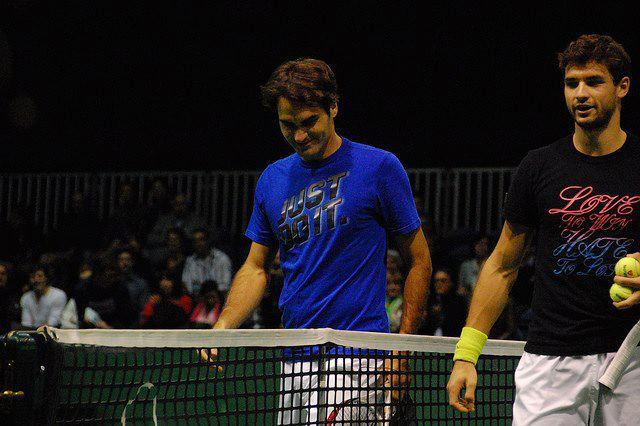 In 2001, a young, 19 year old Roger Federer defeated top seeded Pete Sampras in a historic, five set quarterfinal at Wimbledon. The 29 year old Sampras was seeking his eighth title and 14th grand slam. He would win his final grand slam a year later against Andre Agassi at the 2002 US Open. The two players resembled similar styles, creating a beautiful match that will go down as their only meeting.

At the time, the young Swiss was seeded #15. Federer himself would lose in the next round and bow out in the first round in 2002. Yet in 2003, he went all the way, winning one of his very own seven Wimbledon titles. A little more than a decade later, there is another young up-and-comer, Grigor Dimitrov. The young Bulgarian’s game immediately stood out amongst his peers as a junior. The flashy shot-making, fluidity of his game, the one handed backhand, and the near identical form on his serve.

The similarities brought the nickname, “baby Fed” to Dimitrov, who has risen steadily over the past two years. He is now ranked #22, after winning his first title last week in Stockholm, where he defeated David Ferrer in three sets. Both players nearly faced off in Basel a year ago, and in Rotterdam earlier this year.

The anticipation as if meant to happen was on hold. Come Friday night in Basel, the wait is over. Roger Federer and Grigor Dimitrov will face off in their first ever meeting. Previously, they had practiced less than a few times, most notably in Rotterdam this year.

The circumstances are quite similar to Sampras and Federer’s first meeting. The experienced great was heralded as the greatest of all time, yet was ten years older, and was eventually edged out by the younger talent. In 2013, Federer’s season has been subpar. Arguably, his worst since before winning his first grand slam. One year ago, the tennis world was counting his record of weeks at world #1. Today, he’s battling to qualify for the London World Tour finals. The best of the best participate, and Federer has won the event six times, more than anyone. Five of those were done so, undefeated. 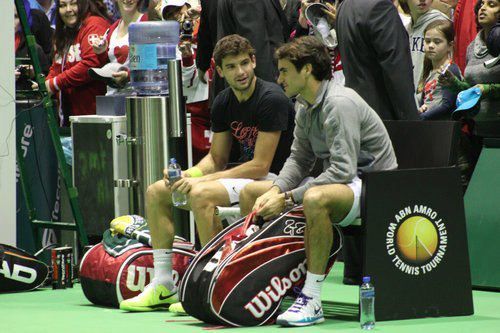 However, Sampras was very much at the end of his career, and Federer at 32, is still not at that stage. His attitude and motivation remain unfazed. Grigor Dimitrov is beginning to ascend, and numerous coaches and commentators have said it is only a matter of time before he can make his mark. His immense talent mixed with experience and fitness can make him the next grand slam champion.

The Swiss Indoors quarterfinal is not a grand slam, but likewise Wimbledon being at home to Pete Sampras, Basel is literally home to Roger Federer. Both players are even sponsored by Nike and Wilson. As Federer switched from the Pro Staff 85 to a 90″ model, Dimitrov used the same 90″ racquet as Federer before switching to the Pro Staff 95. Superstition. Whatever the outcome, it hopes to be a display of smooth styles that could become another moment in tennis history. Federer isn’t retiring anytime soon. Friday’s meeting may be the first of a few more in the future.

I've been waiting for you Federer. We meet at last. The circle is now complete. When I left I was but the learner. Now I am the Challenger.

No Grigor…. I am your father.