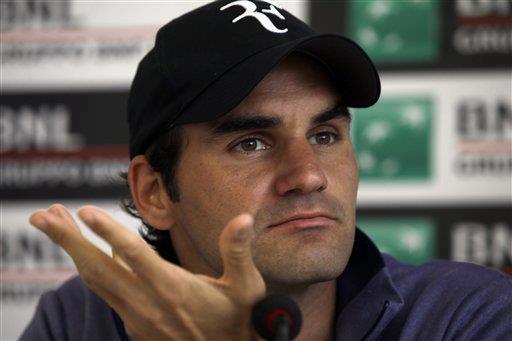 Roger Federer hopes his seven week layoff will start paying off this week at the Rome masters. The Swiss maestro initially scheduled a large block of time away from the tour to spend more time with his family, as well as having a training block.

“I hope it’s going to have some effect eventually,” Federer said Sunday at the Italian Open, having just completed a three-hour training session for the second consecutive day. “Clearly for that I need to start playing well now and put myself deep into a tournament.”

“Most of them (other players) have played two or three tournaments on clay and I’m still looking to get into it, but that can be a big advantage down the stretch,…but for that I need to start winning matches, and I hope I can start here.”

While Federer has never won in Rome, he has reached the final twice (2003, 2006). At 31, he has narrowed his focus to the grand slams and spending more time with his wife and twin daughters. The Swiss advised not to look too much into his recent loss in Madrid. He also was not aware of anyone writing him off already.

“Has it started again? I didn’t read anything,” Federer said when asked how many times he had been written off after a loss like the one in Madrid. “I’m happy that the last year or so I didn’t have to answer many questions. Clearly, when you play well and you win many tournaments then nobody really dares to attack you.”

In the five tournaments he has played this year, Federer has failed to reach a final. After losing to Nadal in the Indian Wells quarterfinals in March, he began his scheduled break.

“I could have played six weeks in a row. I chose to take seven weeks off,” Federer said. “There’s no glory in that. People don’t respect it enough until I’m going to win a big tournament again, then they’ll say how smart I was. That’s why you just take it as it comes.”