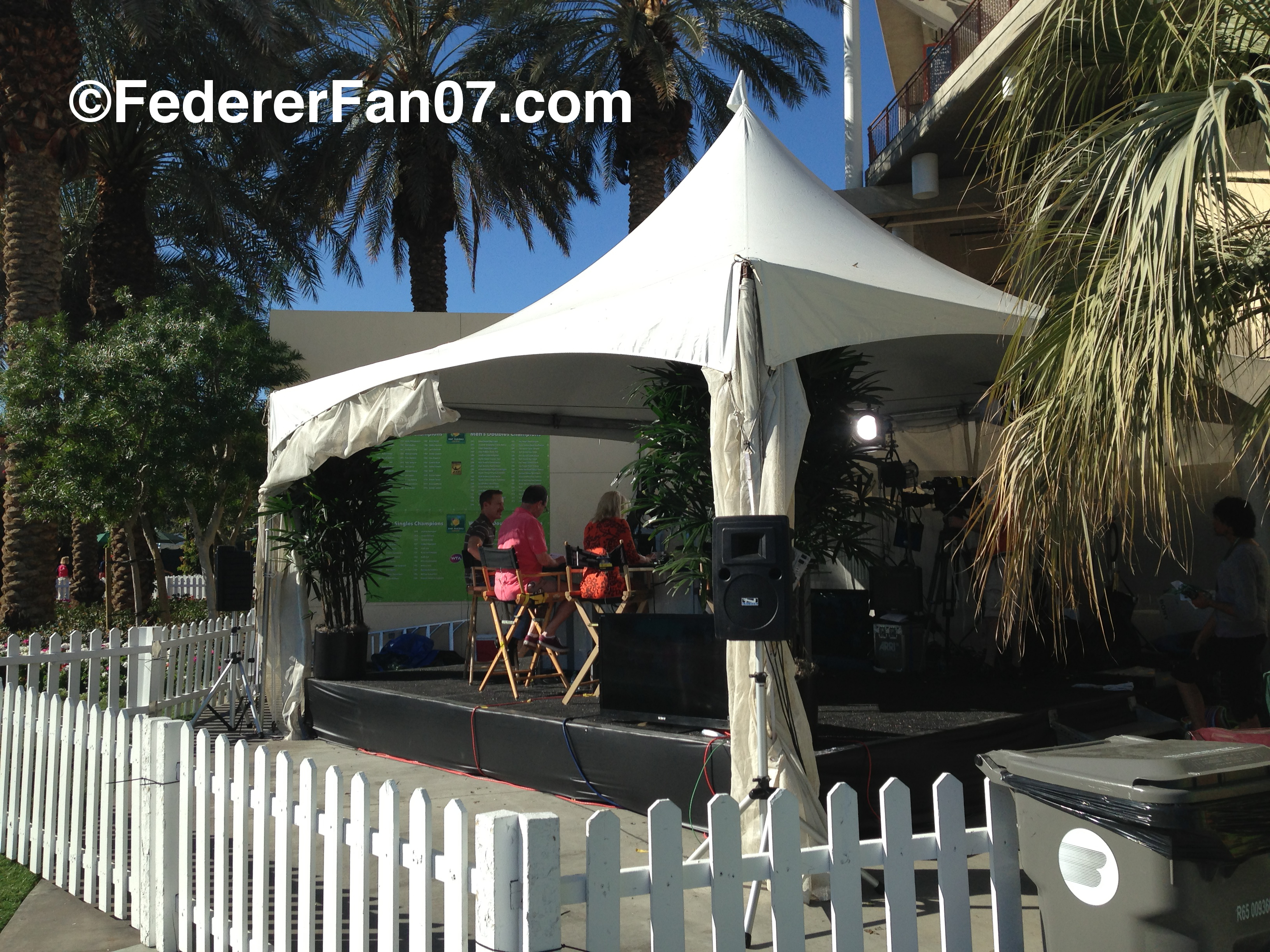 Neil Harman is a man in the tennis world who needs no introduction. He is the tennis correspondent for The Times, (since March 2002) and 2014 will mark his 40th year in journalism. While considered to be one of the premier writers in tennis, Harman is well experienced all around. He previously held the position of Chief football writer for Daily Mail, and is the first tennis writer to win the SJA Sports Reporter of the Year award in 2007.

Earlier this week in Indian Wells, after talking right through an earthquake on set for Tennis Channel, he was gracious to give time for an interview with FedererFan07.com, the #1 Federer site.

First of all, how are you doing?

If I can talk through an earthquake, I can talk through anything. I’m as well as can be expected given the temperature and the conditions, and the beauty of the place…especially, I called home this morning, and its, the wind is whistling and the snow is falling, everyone is very miserable. To be in a place like this covering tennis is pretty spectacular. I’ve been coming here for a lot of years now but it never ceases to dazzle you. It’s a wonderful place.

Lets focus on the top 4 in tennis. Novak Djokovic has won his third consecutive Australian Open title, and recently won his fourth title in Dubai. Can he win here in Indian Wells and go on a streak as he did in 2011, or is that less likely?

Well I think his form in 2011 was quite spectacular coming off the back obviously of his victory in the Davis Cup with Serbia. That was an almost unrepeatable role, but you look at the way he is, the way he’s playing; alright he had a bit of an aberration yesterday against Fognini, just for a while but came back and won. I don’t think its entirely impossible, that he could do what he did, again. He almost, appears unbeatable. I mean he’s almost what Roger was a few years ago. Yes it’s entirely possible, given the character of the man, the way he’s playing, given his strength. Yes, he can.

Andy Murray chose not to play Dubai in favor of rest and training for Indian Wells and Miami. While he has lost early in the last two years at this event, can he make a deep run and possibly take the #2 ranking?

Well, the first thing has to come first. He has to get the results. He’s just not going to get it by someone gifting it to him. This is a big, big tennis event. You have to approach it very professionally; he’s decided as you say to have the training block in Miami rather than play tournaments. When you looked at that first set yesterday you thought, he made a mistake, perhaps he should have played more competition. He came through, and I think his determination to play well here, this week, means that he can do very well. I expect him now, he’s got that first win under his belt, actually to go and start to play much, much better. And can he get the #2 ranking? Couple of things have to fall into place, but I think it’s only a matter of time, to be perfectly honest.

Rafael Nadal has won two of the three events he has entered in his return to the tour. While all on clay, he made an emphatic statement in the Acapulco final. The word is he is back. What is there to see in particular from his game on hard courts before asserting he has truly returned to top form?

Ooh, that’s a difficult one. There were signs in some of the strokes that he played against Harrison, that he was almost there, his movement was good, and that’s what people will be looking at clearly, is his movement good; is he hurting. He’s come through three rigorous examinations on clay. He didn’t feel great in the first week. He felt a lot better clearly in Acapulco. I think it’s a stage by stage process, you can’t look too far ahead. We’re just guessing. In his mind, he wants to go out there and play the best he can; whether or not his knees let him, only time will tell. I hope we do, because the game needs Nadal at the top level, just to push everybody a little harder again. I think if he were to lose in his next round, today, almost here, it wouldn’t really disturb the pattern. I mean he’s got Monte Carlo, Barcelona, Madrid, Rome, Paris, coming up, and that’s where he’s really going to thrive. But this is, you know, I looked at what he did in that first performance and felt very encouraged for his prospects.

Ahh! Saving the best for last

He’s here to defend his title, but has come up a bit short last month in Rotterdam and Dubai. Where do you see his game today, and his chances to win more titles and grand slams?

Umm, every time you say that perhaps Roger’s best days are past, he comes up with something you don’t expect, so it’s a silly thing to say you don’t think he can win because you know he can. Clearly the most talented player ever, you don’t write those people off. He’s 31, he’s got the build, the movement and the speed of a 25 year old. Just perhaps one or two little things are slower than they were before but there is still a part of me that says when Roger walks out at Wimbledon, he’s the favorite. As well as anybody else is playing, he knows what it takes to win there. I think that probably now, if current form is maintained, probably the only grand slam he can win. I would not put it past him to win it a couple more times.

And for the other three slams, if there’s something else needed to happen..

I think you need one of the other three to sort of have a bad day. If they have their best days on hard courts now, I think the best of Djokovic or Murray on hard is a bit too much for Roger. Even the best day of Berdych (US Open 2012) has proven to be a little bit too much. But his (Roger) best day on grass, is still I think, just a bit better than the others. Although Murray, should have won the final (Wimbledon 2012) last year, I think. I mean, he should have been a set and a break up, and he just got a little nervous. But on grass, in my mind, he would still walk into Wimbledon as the favorite.

Read Neil Harman’s latest articles from The Times here. Keep up with his latest updates by following @NeilHarmanTimes on Twitter.