Roger Federer took on Novak Djokovic in the marquee semifinal at Wimbledon Friday afternoon. The Swiss maestro, with eyes on returning to #1, played some of his best tennis to defeat defending champion Djokovic in 4 sets, 6-3 3-6 6-4 6-3. Play was quick, the roof was closed, and history awaited more writing in the latest chapter of the Swiss star. Serving was one of the keys to the match for Federer, and he executed brilliantly, hitting 12 aces (0 double faults) along with his 31 winners. Most impressive was how the Swiss backed up his service games, winning 75% of points on his first serve, and an astounding 72% of points on his second serve.

Both players were moving at a quick pace, and with the roof closed, the elements of an indoor match came into play. Sublime indoors, Federer capitalized immediately at his first chance and served out the first set after just 24 minutes. Djokovic fired back, breaking in the second game of the second set, rushing to a 3-0 lead, holding onto the second set, which lasted 30 minutes. The third set would prove crucial for Federer who at age 30 did not want to be in a deficit late in the match. 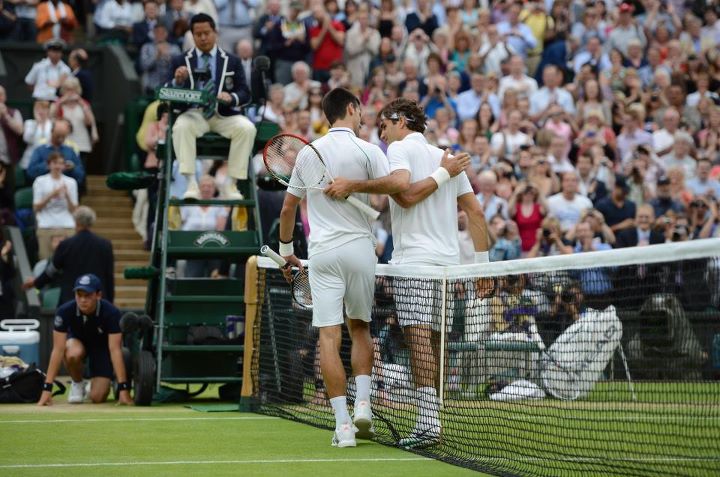 The Swiss managed to control the length of rallies and throw off Djokovic’s rhythm and mental focus, breaking at 5-4 to gain a two sets to one lead and the advantage of serving first in the fourth set. From there, Federer’s confidence rose, his backhand loosened up, and with an early break, he held on to serve out the match.

Federer is now 8-0 in semifinals at Wimbledon, and into a record 8th final, and record 24th grand slam final overall. He seeks a record tying 7th title (Sampras) at the All England Club on Sunday when he takes on Andy Murray or Jo-Wilfried Tsonga.

The Swiss maestro’s thoughts after the match.

“This is what you want to be playing for – the Wimbledon trophy,” Federer said. “I’ve got a tough task ahead of me.”

“There’s obviously a lot on the line for me in terms of winning here, the all-time Grand Slam record, world No. 1,” Federer said. “I’m also going into that match with some pressure, but I’m excited about it. That’s what I play for.”

“I was able to play some fantastic tennis today,” Federer said. “The first two sets went really quickly, and then the third set was obviously key to the match. I was able to maybe step it up, get a bit lucky maybe.” 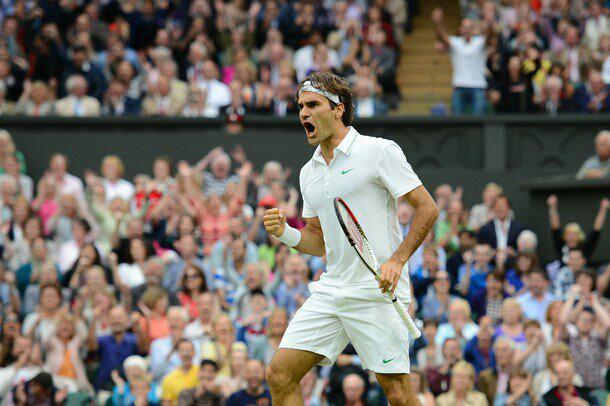