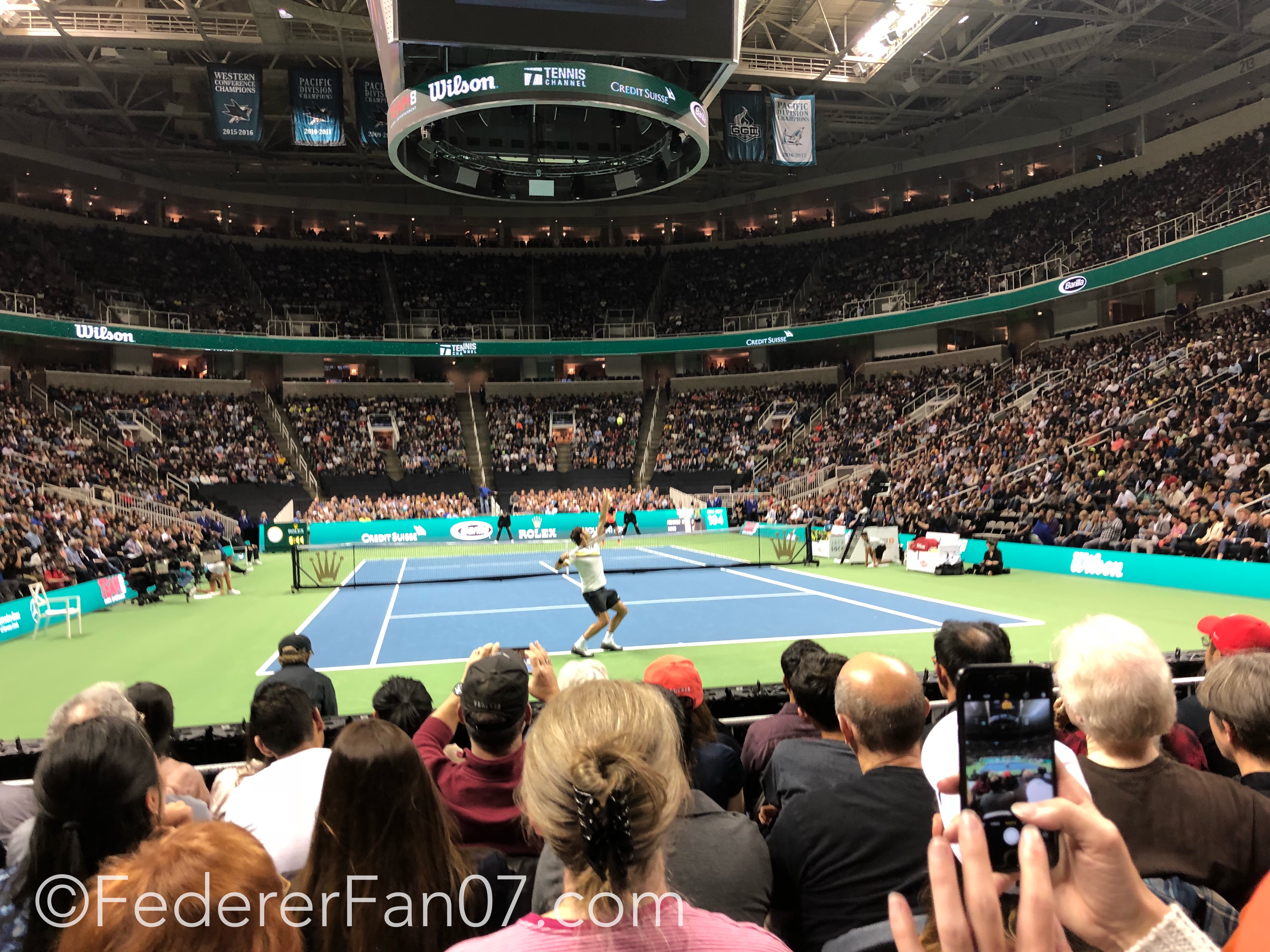 Federer Amazes the Bay Area in Match for Africa Silicon Valley – In his first appearance playing in the Bay Area, Roger Federer, along with Microsoft co-founder and former CEO Bill Gates, NBC Today Show’s Savannah Guthrie, and top ranked American Jack Sock, put on an enjoyable Monday evening in San Jose in front of a sell-out crowd at the SAP Center. Federer and Gates, who won a doubles match at the Match For Africa in Seattle last year—improved to 2-0 as a team, holding off a late surge to beat Sock and Guthrie in the first match of the night, 6-3.

“I think I’m good at picking partners,” Gates said afterwards when asked about his undefeated record. “Thank you for being part of the Match For Africa again,” Federer said to Gates. “I look up to you for everything you do, so thank you, and thank you for being a great, great partner tonight too.”

After a short break, Federer and Sock came back on court for the feature singles match and started out with some serious play, as the American broke in the first game and once again for 6-5 in the first set. The 36-year-old Swiss came back from a break down twice to win the first set and eventually close it out in straight sets, 7-6 (9), 6-4.

“Roger, in my opinion, is the greatest of all time to play this sport,” Sock told the crowd afterwards. “And I think he’s just as amazing a person off the court with all his philanthropy and his foundation. Thank you for inviting me and letting me be a part of this.”

“Thanks to Jack for being such an unbelievable sport tonight,” Federer said. “It was so much fun tonight—honestly—I really enjoyed it. I love playing in new places I’ve never been before, and all the fans made it super special. Thanks to everyone for coming out and supporting my foundation.”

After the interviews it was revealed to the crowd that the event had raised more than $2.5 million for the Roger Federer Foundation. 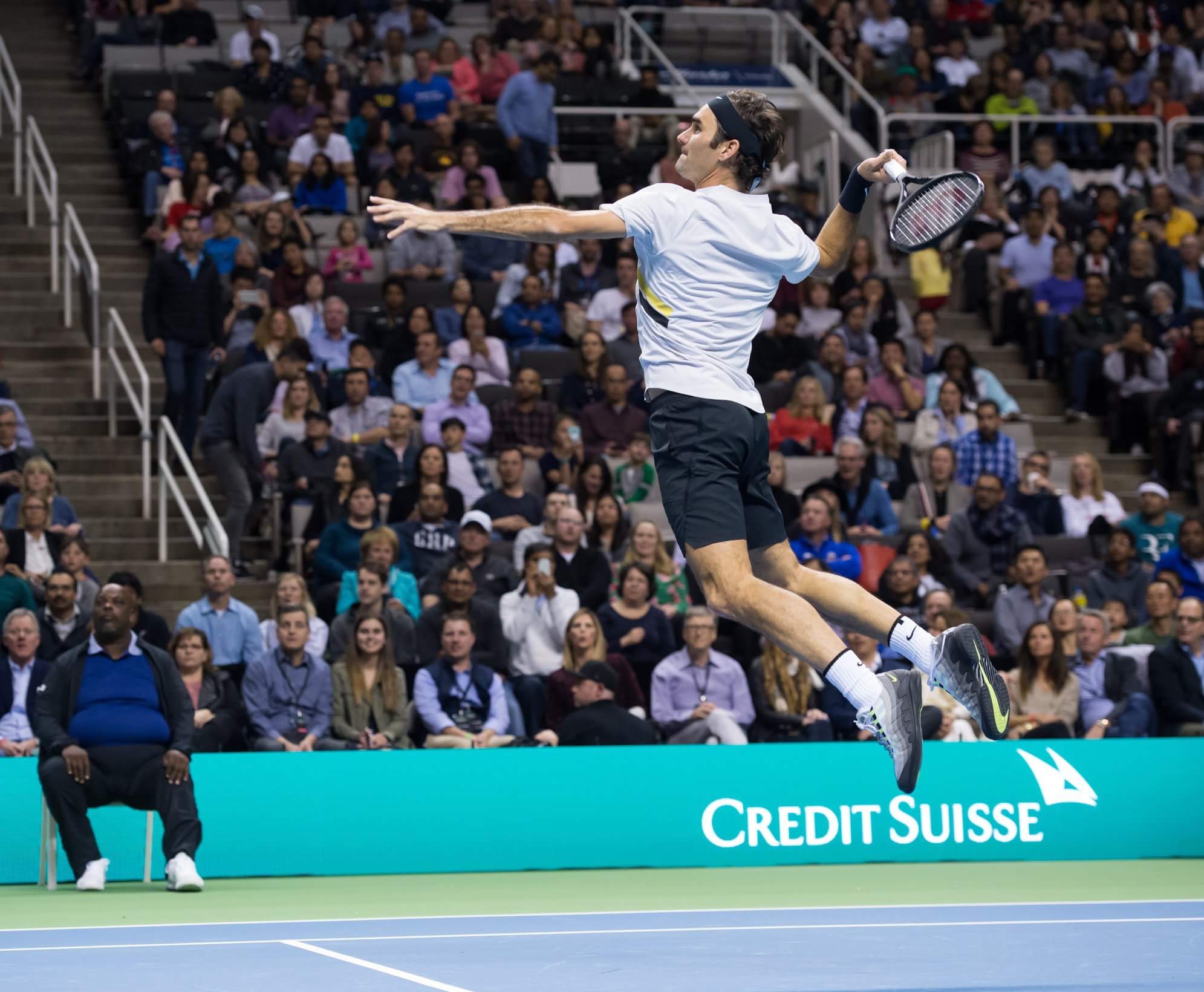 Solid strategy 👏🏼
"I'll do the running, and he does the thinking." –@RogerFederer

“These kinds of evenings are great opportunities for us, not only to raise funds, but also to raise awareness for our cause,” Roger Federer Foundation CEO Janine Handel told Tennis Channel’s Ted Robinson at the event. “So many children are living in poverty and one of the most powerful tools to exit poverty is education, so they have a chance in life and can reach their full potential.”

The 20-time grand slam champion also spoke about his current level of play and his prime form at this stage of his career.

“Those are definitely special times in my life and my career,” Federer said. “The dream as a little boy was to make it one day to world No. 1, but not at 36 years old I can tell you that. It was probably at some point at 25 maybe if things went really well.

“I had a tough year in 2016 with my knee and stayed positive, was resilient and fought to come back and really believed I could actually win again. I didn’t think it was going to be at this level. It’s been an unbelievable journey the last 14 months and my team has been incredible. I’m loving every moment that I can still stay on tour because you never know when it’s going to end.”

Federer now heads to Southern California, where he is the top seed and defending champion at the year’s first ATP Masters 1000 tournament, the BNP Paribas Open in Indian Wells. Watch highlight clips and full match video from Monday night’s Match for Africa event below.

Federer vs Sock, coming up next on Tennis Channel📺💻📲🎾https://t.co/tPoe44C26q pic.twitter.com/TTVmJmw29s

On the 20th point of the tiebreak, @RogerFederer delivers to win the first set!

Watch now on Tennis Channel and on the new app📺💻📲🎾https://t.co/tPoe44C26q pic.twitter.com/TYGFGgPfN8

Watch out, @RogerFederer!@JackSock's not playing games 🎯

.@RogerFederer gets it done!

"It's because of you guys…" @RogerFederer speaks to the crowd after #MatchforAfrica. pic.twitter.com/lraSBALHRZ