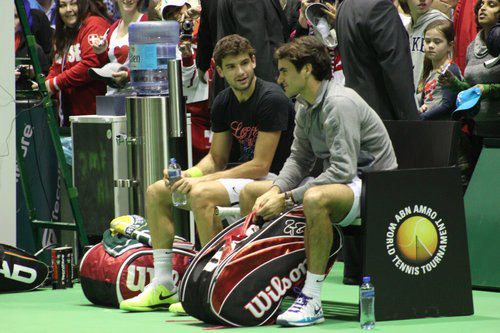 Grigor Dimitrov is one of the young rising stars in tennis today. The 21 year old Bulgarian has climbed up the rankings, currently at world #34. He has shown the capability and potential to become a future star. With more experience, he is sure to ascend to the top of the rankings.

One thing however, is how strikingly similar his playing style is to Roger Federer. Both have one handed backhands, sure, but it is the fluidity and flair in the young Bulgarian’s form which draws the comparison. Dimitrov recently took part in a feature for CNN with Pat Cash, where he spoke about enjoying being compared to the Swiss early in his career. Now he prefers that fans stop making those comparisons and see the uniqueness of his own game today.

Dimitrov had a practice session with Federer earlier this year in Rotterdam. The two have never met in a tour match, yet.