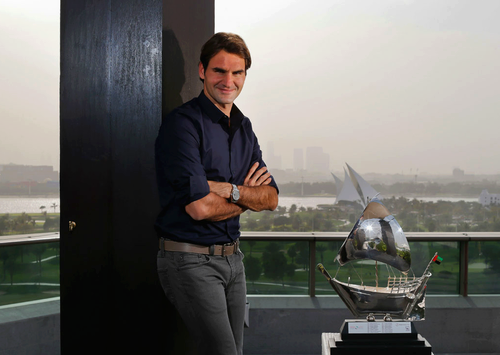 The ATP World Tour interviewed Roger Federer in Dubai as part of a focus feature for the Dubai Duty Free Tennis Championships. The Swiss maestro talked about enjoying the tournament, but more importantly, addressed that 2013 is a transition year for him. He confirmed he is playing less to spend more time with family and will be taking seven weeks off after next month’s BNP Paribas Open in Indian Wells.

“Things are going to be a bit more difficult this year than last year just because, I made a schedule according to my needs of me as a player and as a dad, you know, and thats where this year is more of a transition period, but you know, if I do play amazing and I win some of the big tournaments, I obviously can return to world #1, but its not as big of a priority as it was last year.”

Federer also said Rafael Nadal won’t have as much of a chance in the next six months due to not playing the second half of last season, hence defending lots of points up through Roland Garros. He went on to credit Novak Djokovic has being the front runner after winning the Australian Open and World Tour Finals, and it will take a great effort from himself or Andy Murray to change that anytime soon.

The Swiss maestro is in a confident mood, looking to get away from the tour and spend quality time with family in longer breaks this season, using the time off to keep his motivation at a high level when he returns. Less is more.