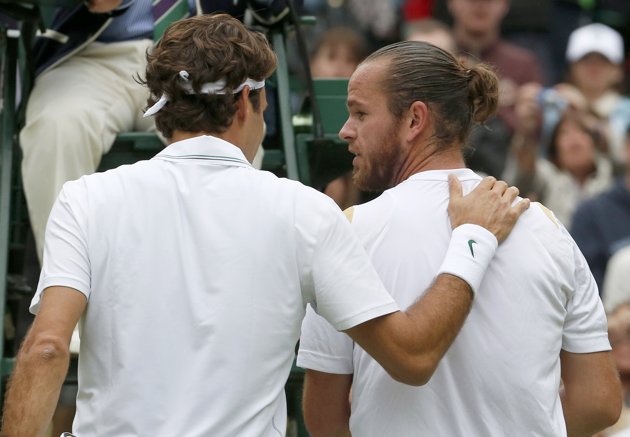 Roger Federer overcame an obstacle of his own back problems today as he took on Xavier Malisse in the 4th round of Wimbledon. The Swiss maestro shrugged off a rare medical timeout to defeat Malisse 7-6 (1) 6-1 4-6 6-3 on Monday to reach his 33rd consecutive grand slam quarterfinal. Federer was in trouble after taking a 4-3 lead in the first set, having to leave Centre Court to receive treatment for his back. He moved gingerly afterward but prevailed in the tiebreak. The weather was the only concern after that, as a 40 minute rain delay occurred, although the roof remained open.

The 16 time grand slam champion cruised to the second set before Malisse immediately broke to open the third and maintained his one break toward cutting Federer’s lead in half. From there, the Swiss soundly broke twice on route to closing out his 850th career win and booking his place in the Wimbledon quarterfinals. He will face Mikhail Youzhny on Wednesday. 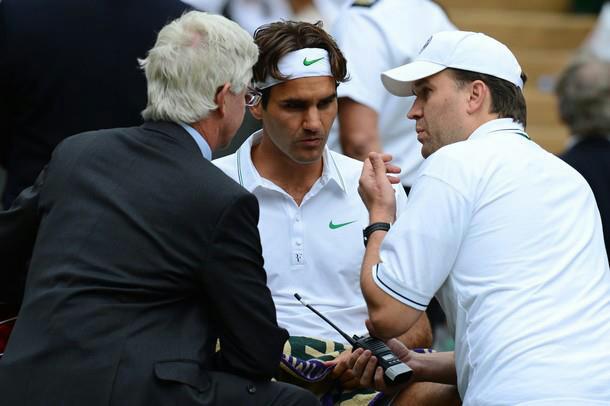 After the match, Federer spoke about his back injury and the decision to keep the roof open amidst weather concerns.

“I felt the back going the beginning of the first set, and then I played on it maybe three, four games,” said Federer. “I asked for the trainer, the doctor to come out to just talk about it. So I decided to have treatment inside.

“Honestly, I’m not too worried. I’ve had bad backs over the years. I’ve been around. They go as quick as they came. But of course I have to keep an eye on it now. I have one and a half days, which is a lot of time, to be quite honest, to work with. Two good nights’ sleeps and I’ll be 100 per cent on Wednesday. I’m pretty convinced, otherwise I wouldn’t have been able to pull out the match the way I did today.”

“I was happy they kept it open because this is an outdoor tournament at the end of the day,” Federer said. “We don’t want to play indoors all the time.”