Federer defeats Soderling to set up semifinal showdown with Rafa

So its the semifinal that everybody wanted, Federer-Nadal. First up in the action today was Rafa Nadal, who easily advanced to the semifinals with a 6-2 6-2 win over Michael Llodra. Roger had the much tougher match-up in his quarterfinal against Robin Soderling but played solid tennis and dispatched the Swede 7-6 (2) 6-4. It was quite impressive how Federer stepped up in saving a 15-40 game at 2-3 in the second set, finishing with a fiery CMON!…and then later on, converting on break point right away at 4-4 in the second set to serve out the match.

So that sets up the big semifinal match between Roger and Rafa tomorrow. Earlier Thomaz Bellucci upset Tomas Berdych, 7-6 (2) 6-3, and he awaits the winner of the match between Novak Djokovic and David Ferrer in the other semifinal. 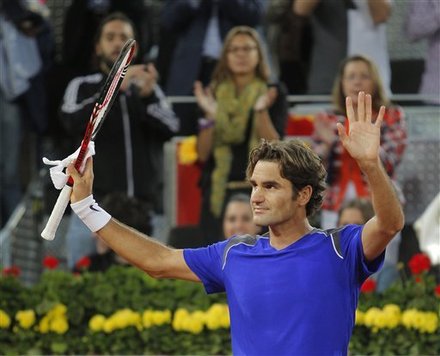 I hope many of you were able to watch the match and coverage of Madrid right here on FedererFan07 with the newly added feature on the live streaming page. 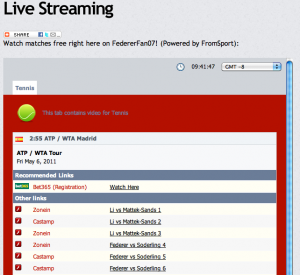 Check out the latest photos at FedererFan ZeroSeven on Facebook. You will see more updates, news links, photos and video from the new personal Facebook page as a result of many fans finding it better for them to keep up and interact with the site.